By Enock Kusasira and Kevin Mwanza

BULAMBULI, Uganda – In Uganda’s eastern border district of Bulambuli, there is a town where the mayor put up cows as prizes in a latrine-building competition. To win, the latrines had not only to be the best and the cleanest, but also made of locally-available materials.

“We have used banana fibres for the roof, and cow dung on the walls and even on the floor,” said Stephen Mwanga, mayor of the town of Bulegeni.

“We decided that since we are not of very high income, we should use local materials to build latrines,” he said.

Amid cheers from villagers, Mayor Mwanga named 67-year-old Dafina Muzei as winner of the 2019 competition and presented her with her well-deserved cow.

“She added more than what is in the books,” said the mayor, commending Dafina for her work.

“She said this place is rainy and went ahead to put slippers out for people who want to enter the toilet. If you go to her toilet, you won’t even know you’re in one,” he said.

In February, Ms Hind Khatib-Othman, Chair of the Water Supply and Sanitation Collaborative Council (WSSCC), had the opportunity to meet Dafina in her home village of Nabugobeyi. There, near the market, there is a sign that stands tall, already proudly declaring the village open defecation free (ODF), even though the June target date for becoming fully ODF is still months away.

Like many other regions in Uganda, where 80 percent of the population has no access to basic sanitation services, Bulambuli has faced outbreaks of waterborne diseases before, including at least two cholera outbreaks in the last five years, according to Dr Gidare Muiri Mudaya, District Health Officer.

To address the challenge of open defecation, the government launched the Uganda Sanitation Fund (USF), implemented by the Environmental Health Department within the Ministry of Health and supported by WSSCC’s Global Sanitation Fund. The aim was to create demand for sanitation facilities to the point that people would come up with creative ways to build toilets in their communities.

The program targets some 5.6 million people living in more than 9,000 villages across 44 of Uganda’s 138 districts. Since its launch in 2011, toilet and latrine coverage in USF-supported districts has risen to 94 percent in 2019, according to Ministry of Health data.

According to Dr Mudaya, one of the essential factors in achieving and sustaining a community’s ODF status is for its able members to come together to ensure that disadvantaged people not only have access to, but are able to make use of improved sanitation and hygiene.

This was the case in Nabugobeyi village, where community members came together to build a toilet for 83-year-old Ngumbe Annefred, who could not manage to make one for herself. Asked if it was difficult to support the elderly like Annefred, community members said that it was not, because, as one put it, “diarrhea has no boundaries.”

“We used to have over 80,000 cases of acute diarrhea. We have now reduced that ten times annually, and this is just by improving sanitation,” said Dr Mudaya, at a Bulambuli town-hall meeting that brought together the WSSCC delegation, the Ministry of Health, local government leaders and other partners.

“Once community members realized that the importance of good sanitation extends beyond their homes, they made an effort to make sure their neighbours also had latrines,” she said.

Ending open defecation is also a key entry point for dealing with inequality and gender issues in the community.

“Open defecation is not good because it makes women vulnerable to attacks and rape. We need to address the inequities for women, as well as for men, in order to improve health outcomes,” said Ms Khatib-Othman.

Menstrual hygiene is one of the pillars that WSSCC addresses through its partners, such as the Uganda Sanitation Fund, to help reduce the incidence of adolescent girls dropping out of school due to menstruation.

Wakoli Kevina, a teacher at Muyembe Primary School in Bulambuli, said they are working to address menstrual health and hygiene through a senior woman teacher at the school who confidentially addresses any challenges faced by adolescent girls. 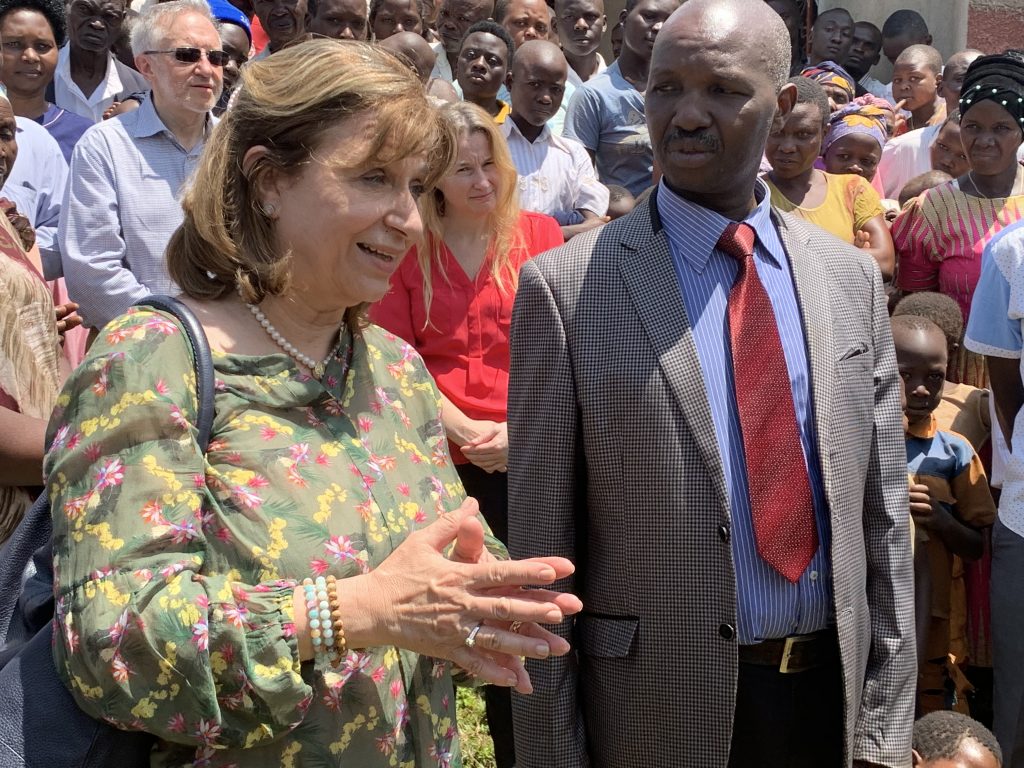 At the end of her visit in Bulambuli, the WSSCC Chair said she was proud of her organization’s partnership with Uganda and what it has been able to achieve.

“But obviously, the agenda is not finished yet, and there is a lot of work to do. We hope that we will continue to partner with them,” said Ms Khatib-Othman.

“In our new strategic direction, we want to work to the level where we can help them have proper sanitary services at schools for them to be retained and complete the education cycle,” she added.

“What I found is that political leadership, political commitment has helped communities to end open defecation,” she said.

The truth of her observation was borne out by the efforts of Mayor Mwanga in the town of Bulegeni.

“If we depend on medication, we will not manage,” he said, referring to the shortcomings of treating illness after the fact.

“We decided we should prevent. One way of preventing cholera, diarrhea, and dysentery was to dig pit latrines, clean them, cover them and make sure whoever visits these pit latrines washes his or her hands before rejoining the community.”

He was determined to show his community that building latrines was within their means, even if he had to use the prospect of winning a cow to do it.