USD $55 million on investments in water, sanitation & hygiene were announced at the Global Citizen Mandela 100 Festival in South Africa

Over the last few months, citizens around the globe took over 5.6 million online actions to end extreme poverty, including 1 million who asked global and national leaders to commit to water, sanitation & hygiene (WASH). The results of this engagements are valued at USD $55 million on investments for the sector and will affect over 12 million lives in several countries in Africa. The announcements were made on the Mandela 100 Festival, organized by WSSCC partner Global Citizen on 2 December in South Africa. 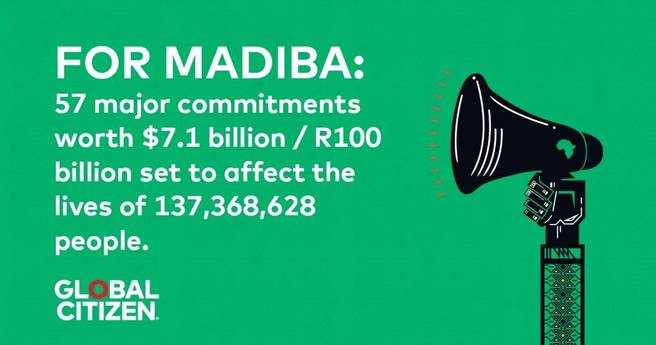 Among the commitments, Madagascar and Nigeria, WSSCC’s countries partners, declared investments in sanitation. Madagascar announced that they will commit USD $40 million to achieve open defecation free status and promote sanitation in the country.

For Nigeria, the Director General of the Cross River State Primary Health Care Agency, Dr. Chimaobim Betta Edu, addressed the thousands of Global Citizens: “Achieving clean water and sanitation requires African solutions. And so, it is my great pleasure to announce today that I am committing $3 million dollars every year for the next five years, for a total of fifteen million dollars for sanitation in Cross River State.” She ended with a call to action for other Nigerian governors to join Cross River to champion this issue.

The announcements on the sector were followed by Vodacom. The company’s CEO,  Shameel Joosub, and GCO, Corporate Affairs, Takalani Netshitenzhe, announced that Vodacom will be supporting South African President Ramaphosa’s investment in digital technologies by “pledging USD $34,813,367 in fighting gender-based violence; enhancing sanitation in schools; and enhancing digital literacy for teachers, learners, youth, and in early childhood development centres.” Takalani also announced that Vodacom will be partnering with the South African Government to ensure that children have access to safe pit latrines.

The South African actress Nomzamo Mbatha presented a Call-To-Action announcing for every retweet of her post, Vodacom will be donating 1 RAND (USD 0.07) to the issue of pit latrines, up to RAND $500,000 (around USD 36,500,00). Take an action, click hereto retweet.

The Mandela 100 Festival responded to Nelson Mandela’s call for us to be the generation to end extreme poverty, artists and leaders were joined by 100,000 Global Citizens who’ve taken action on the Global Citizen social advocacy platform to earn their free tickets to the festival at FNB Stadium in Johannesburg. WSSCC partnered actively with Global Citizen on the WASH commitment-making.

The Mandela 100 Festival, in partnership with the House of Mandela, served as the capstone event of Global Citizen’s year-long Be the Generation campaign, inspired by the revered former leader of South Africa and his lifelong dedication to rallying people together to use their collective voices to speak for the most marginalized people.

The Festival and activities leading up to it had a special focus, among other issues, on WASH — specifically menstrual hygiene and ending open defecation. In total, over 5.65M actions led to 58 commitments and announcements worth USD $7 billion, set to affect the lives of over 137 million people. Read more about the results here.