Story
Since the beginning of her sentence at Mzuzu prison, Christina Mauwena (Not real names) has suffered from overcrowding and poor sanitary and hygienic conditions characteristic of Malawi’s penitentiaries.
By
Philip Son

She was surprised to learn that she would be one of the 42 inmates to receive training on menstrual health and hygiene (MHH) through Saint John of God (SJoG), a local NGO receiving financial and technical support from WSSCC.

The workshop addressed the gaps revealed by the participatory assessments with inmates and prison officers that were conducted in June and July. These exercises showed the critical status of MHH services in prisons: female inmates did not have reliable access to sanitary materials and the lack of drying spaces and disposal facility for used sanitary pads were contributing to infections and the blockage of the sewage system.

In the training, WSSCC’s three-pronged approach were used to tackle these problems, as breaking the silence, managing menstruation hygienically and safely, and reusing and disposing menstrual health products safely were all found to be connected in Malawi’s prisons. 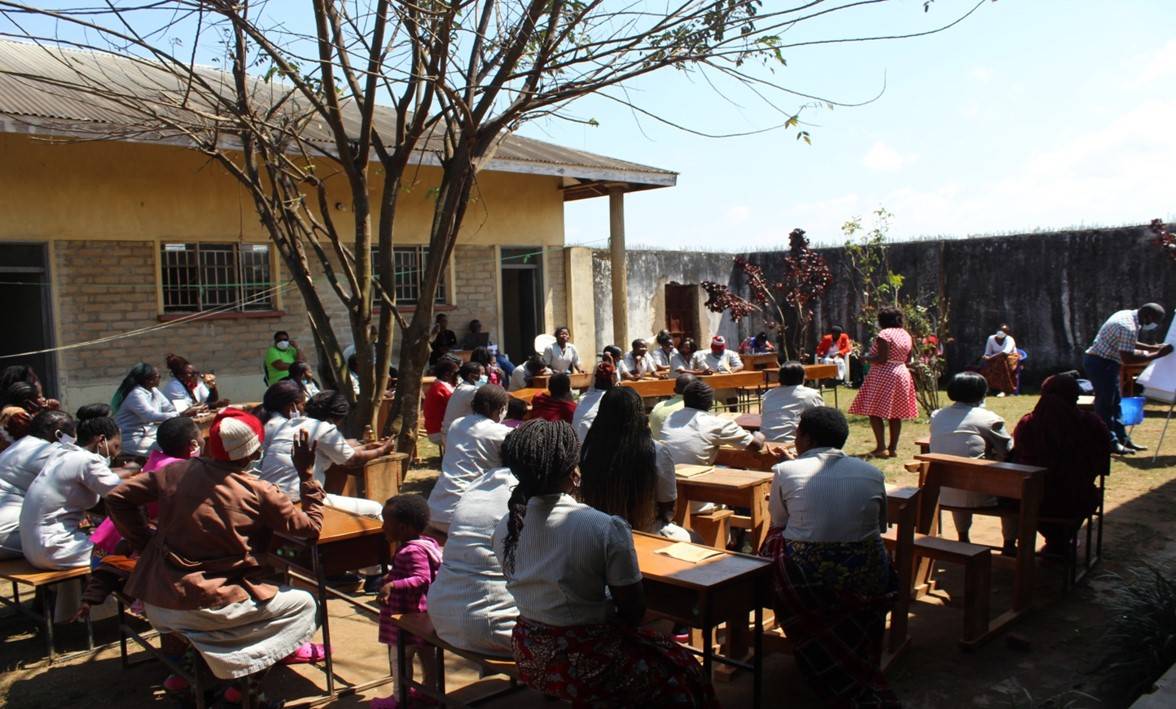 “In Malawi, menstruation is connected to beliefs and taboos that contribute to unsafe disposal,” explained Mr. Christopher Mhone, Programme Manager at SJoG. “For example, people believe that used menstrual products might be collected by others for black magic, leading to the improper disposal of used pads, such as hiding or flushing them down the toilet.

Ms. Phyllis Nkhoma, a prison officer at Mzuzu prison, also reflected on how shame around menstruation led to unhealthy practices. “Previously, women were very shy about hanging used MH cloths for drying, as they were afraid that they may be laughed at.”

To dispel such stigma and myths about menstruation, the training kicked off by unpacking all the narratives around menstruation and sharing stories on first menstrual experience. Once participants became more comfortable with talking about menstruation, the facilitators delved into menstrual hygiene management’s (MHM) relationship to health and Leave No One Behind (LNOB)/Equality and Non-Discrimination (EQND) principles. Inmates then learned how to dispose of sanitary napkins properly and sew reusable pads before participating in action planning for the future.

While only a month has passed since the training, inmates and prison officers are already noticing improvements in MHH conditions and practices in the prison.

For one, inmates are now using the incinerator that was built through SJoG and WSSCC support in early August, around the same time as the MHH training. “We now keep used pads in a plastic bag and ask the wardens to escort us and burn them at the right place,” explained one inmate.

Ms. Nkhoma concurred: “Since the training, we can’t find used pads that are hidden even if we look for them.” 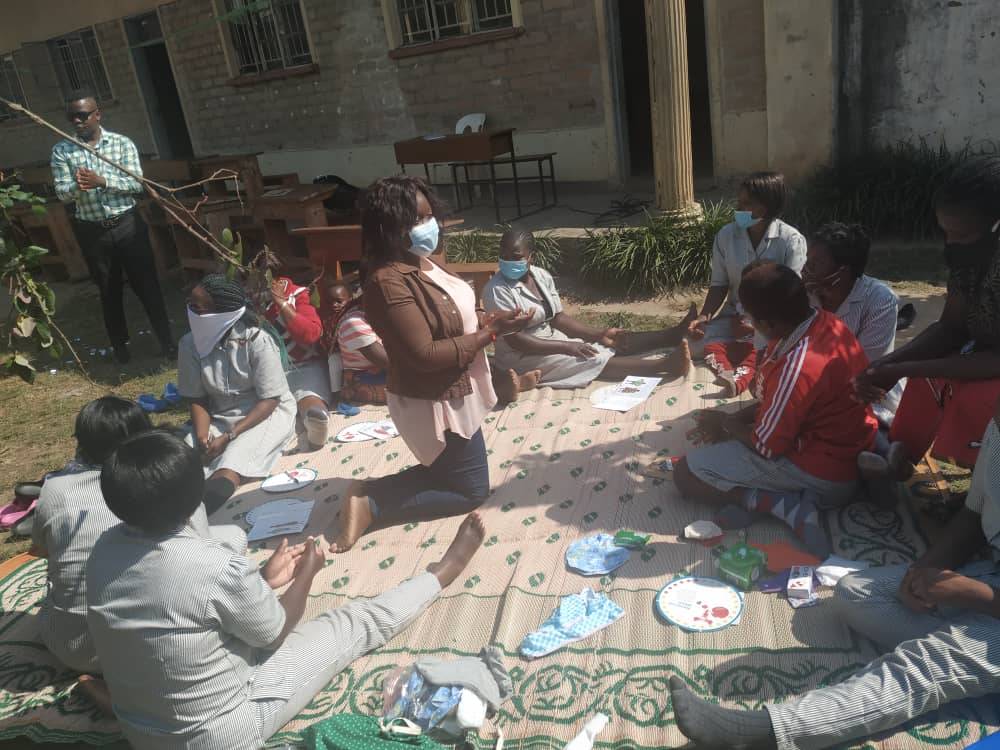 The adoption of positive practices points to the fundamental shifts in attitudes and beliefs that are happening below the surface.

“Before the training, it was difficult to be open about menstrual issues because we thought that no one should know that you are menstruating,” explained Christina.

“But with what we have learned, we are open to telling anyone about it. When a new inmate arrives, we now welcome her and tell her how to manage menstruation in a prison environment. We are open to one another.”

With the technical knowledge gained through the training and the materials provided by SJoG, inmates now make reusable pads every Thursday—an activity that has given them new hopes for the future and converted them into MHH advocates. Some now think about starting a business for reusable pad-making as well as an organization that distribute reusable pads to prisons, schools, and orphanages. “It’s like we have been given a responsibility, not only for pad-making, but also teaching our friends and relatives out there. We cannot be shy to talk about these issues,” reflected another inmate. 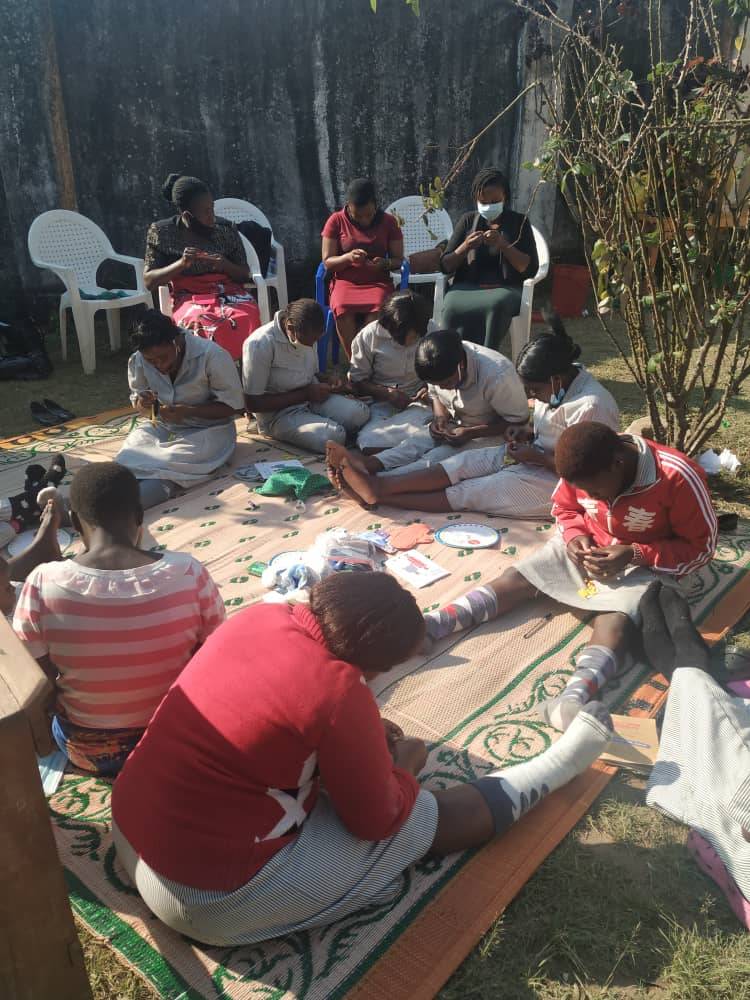 SJoG believes that these new attitudes are signs of system change. Indeed, the next MHH training for the remaining 33 inmates at Mzuzu will be led by two inmates and four warders who have been selected as MHH ambassadors. While they will be supported by the NC office and SJoG staff, Mr. Mhone is thrilled that this approach was agreed upon during a recent meeting with the prison management. “This assures prison management’s acceptance and the adoption of MHM in the prison system. This, for me, is key to sustainability.”

The training has “opened up officers to take action and shaken up their system,” according to Ms. Ella Mitchi, Project Coordinator at SJoG, explained with excitement that the organization is planning to expand their activities to be aligned with the expanded mandate of the new Sanitation and Hygiene Fund, and looks forward to continued support and guidance from the SHF.

Mr Mhone went on to say, “The support we have gotten from WSSCC now transitioning into the Sanitation and Hygiene Fund has been an important factor. We are going in the right direction.”

Addressing Menstrual Health and Hygiene (MHH) gaps while promoting empowerment of women and girls is one of of the strategic objectives of the Sanitation and Hygiene Fund.