The GSF-supported Kenya Sanitation and Hygiene Improvement Programme (KSHIP) works closely with local government actors, through Implementing Partners. Find out how Josephat Geteya Onchari, an Assistant County Commissioner, was triggered to become a key WASH champion for Kenya and KSHIP.

Based on a paper by Elizabeth Wamera, Program Officer, WSSCC. 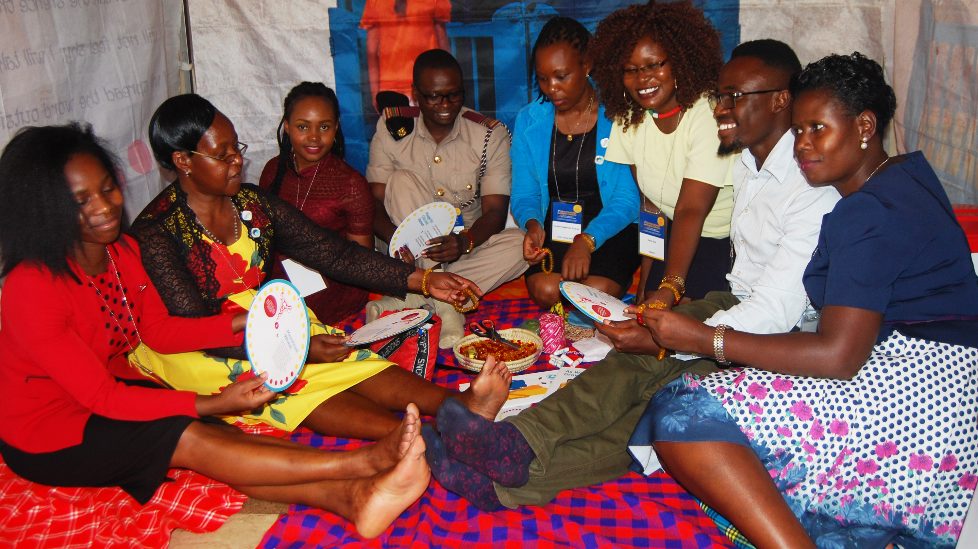 Josephat Geteya Onchari, 32, is a grassroots WASH champion through and through. He is the first Assistant County Commissioner (ACC) to be fully trained by KSHIP as an open defecation free (ODF) verifier and in facilitating the Follow-up MANDONA approach. What’s more, he is a steadfast menstrual hygiene management (MHM) champion, encouraging men to be more involved in breaking the silence around MHM. But how did he get here? This is his story.

Josephat was born in Kenya’s Nyanza region, went to school in the Rift Valley region and attended university in Uganda. A trained lawyer, he is currently pursuing his Master’s Degree in Human Resource Management. An ACC in Ithanga Ward, Murang’a County, he is an important government official in Kenya’s civil service. All of the chiefs in his ward report to him, and this information is then passed on to higher level officials, in line with Kenya’s system of decentralized governance. ACCs deal with community issues, especially in relation to development and security. They are meant to be impartial in their work, they are not politicians, and in most cases they do not come from the areas where they work.

Josephat’s sanitation story begins in April 2016, his first day on the job. The moment he arrived at the office, he was invited to a ward meeting for church elders to discuss sanitation issues, organized by KSHIP implementing partner Caritas Murang’a. He planned to attend the meeting to officially recognize the elders as well as the sanitation implementing partners in the area. He was simply meant to make an appearance, and he did not anticipate that the meeting would take longer than 20 minutes. Little did he know how significant an impact it would have on his life and how he viewed issues in the community, especially regarding women.

When he arrived, the meeting was already in session. He learned that Ithanga had been targeted for Community-Led Total Sanitation (CLTS) behaviour change interventions because it was identified as one of the areas with very poor sanitation coverage in Murang’a County.

The meeting was followed by an Institutional Triggering session to mobilize support from the leadership in Ithanga for the CLTS activities that Caritas Murang’a planned to carry out. It was the first time that Josephat heard about CLTS, and he was disgusted and shocked when he learned about the destructive impact of open defecation. Inspired by the session, he resolved to champion improved sanitation and hygiene and make a real difference in his ward. This was despite the fact that specific WASH advocacy is not in an ACC’s official job description. He also became determined to address the WASH challenges faced by women and girls, particularly by supporting MHM. Josephat was triggered. 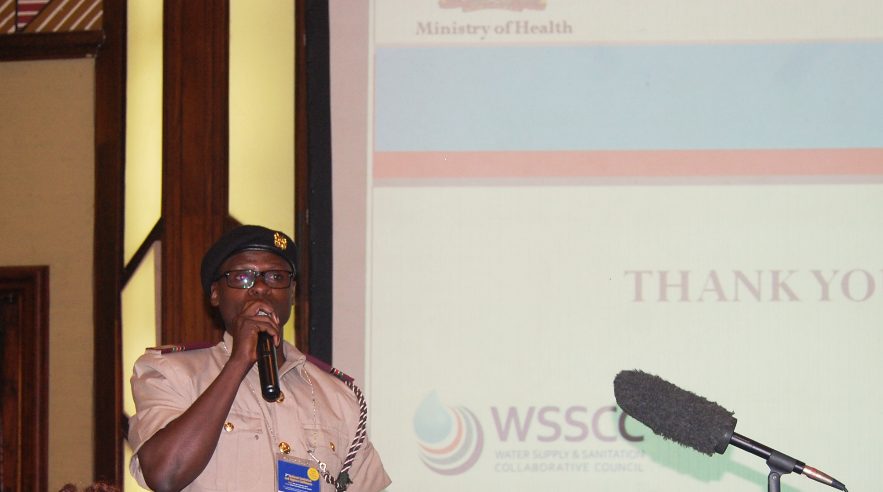 A grassroots advocate and approachable neighbour

Jospehat comes from a unique crop of 637 young professionals who were trained by the Government in a range of approaches, including in paramilitary techniques. He was trained to demystify the conventional commissioners’ role, which was previously seen as bureaucratic, transforming the role to be more approachable to the communities.

Using this approach, Josephat has been able to better gather information and bond with communities. Thanks in part to this approach, his ward is one of the areas that enjoys relative calm in the region, despite being a dry, food-insecure area.

Josephat has covered over 68 square miles, visiting literally every household in his ward. He is well known and respected by every household and communities in general, and most of the households have his mobile number. When meetings are called by his office, the community shows up promptly, and he has used these forums consistently to promote sanitation and hygiene.

In addition to triggering communities, he visits households to talk to them about sanitation and hygiene, among other development issues, engaging them as a neighbour and not an administrator. He encourages the men to ensure clean compounds, even though this has previously been considered a woman’s chore.

Josephat also likes to interact with children and has worked with them in schools. He notes that the children have successfully taken their knowledge of installing tippy taps for handwashing from their schools to their homes. He has cultivated a good rapport with the elderly and other vulnerable groups that would in many cases not receive a commissioner’s attention, such as the disabled or widowed. In addition, he has met several officers at the county and sub county levels to discuss issues on health and sanitation, on the behalf of his ward.

Josephat talks about sanitation and menstruation in public meetings that are organized by his office, which are focused on discussing security issues in the ward. He even goes as far as demonstrating to women how to use sanitary towels properly!

During Kenya’s second National Sanitation Conference, Josephat shared his experience as an MHM champion, encouraging men to be more involved in breaking the silence around MHM. He shared a story about going to the supermarket to buy sanitary towels for his girlfriend and not knowing how to go about it. He managed to get the right sanitary napkin after calling back home, while the queue in the supermarket waited for him to get off the phone.

“We need to be supportive! MHM is not [only] about women… it’s high time men took part in it as it affects the men directly or indirectly!” he said. 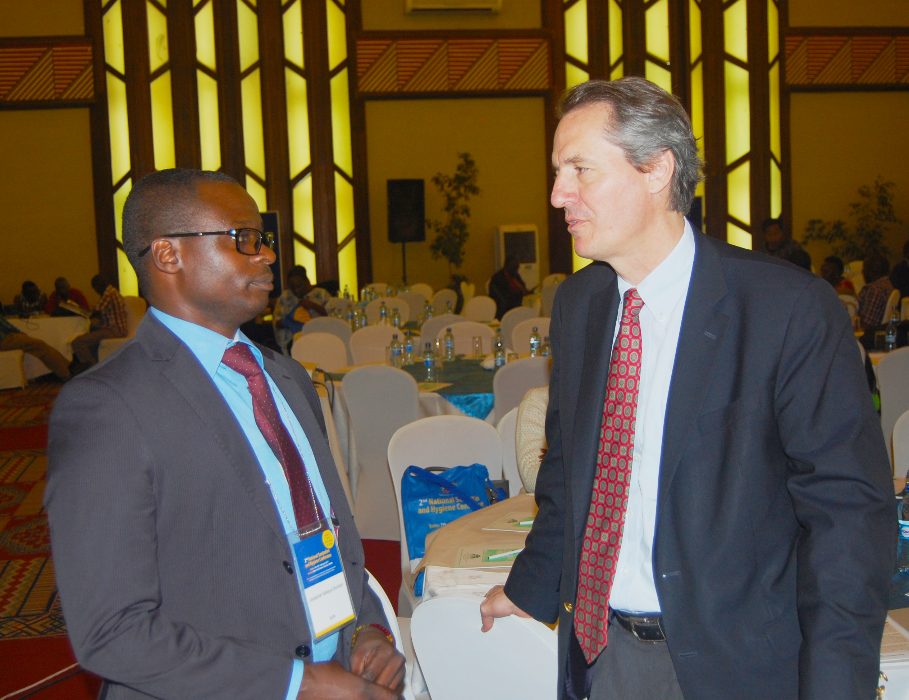 Josephat’s vision: Improved health and sustainable WASH for all

Josephat looks forward to having his division declared ODF by 2018, where every household has access to an improved toilet and handwashing facility. So far, he has helped ensure that there is over 70 percent toilet coverage in his area. He also aims to eventually help eradicate WASH-related preventable diseases in his division. As soon as ODF status is achieved, Josephat plans on sharing his WASH experiences in a publication.

He aims to continue promoting the benefits of working through ACCs in WASH programmes and integrating specific WASH duties in their job descriptions from the outset. This is because ACCs receive valuable information on communities daily, are very accessible and are already employed by the Government in every part of the country. This provides a strong and sustainable network to utilize, to ensure that there is effective follow-up on WASH issues after ODF status is achieved.

Keeping an informal settlement in Kenya safe from COVID-19

Omondi suffers from a spinal condition that impacts his mobility and keeps him confined to his house. He relies on his children for...

Data collated by UNICEF further indicates that in sub-Saharan Africa about half of the health care centres do not have access to...

NAIROBI, Kenya - The needs of the most vulnerable slum dwellers draws a spotlight in a webinar convened last week to identify ways to...