Story
In a hand hygiene battle against the COVID-19 pandemic, a boy from a Kenyan village offers an award-winning solution to the challenge of ensuring hand cleanliness for community members. His special handwashing station made of locally available materials shines brightly as a show of innovation especially on this year’s Global Handwashing Day.
By
Kevin Mwanza

Stephen Wamukota could easily pass as just another nine-year-old boy playing with his siblings in the village of Mukwa in West Kenya – until you see the Presidential Award he received for his invention of a hands-free wooden handwashing station.

Handwashing is one of the most effective ways to reduce the spread of pathogens and prevent infections, including the COVID-19 virus. “When the president said there was coronavirus in Kenya, I decided to build a machine that would help stop it. I had seen a science show on TV on how to assemble machines, and I used that knowledge to make this one,” Stephen proudly declares during an interview at his home.

The machine works by tipping a bucket of water using a foot pedal, which helps users avoid touching the surfaces and reduces the risk of infection. “I want to encourage people to keep washing their hands even after coronavirus ends,” he added.

In the wake of his innovation, Wamukota has received much acclaim. The County Governor, Wycliffe Wangamati, has even promised to pay for Stephen’s education when school resumes.

The BBC News listed Stephen’s handwashing station as one of the top ten African innovations to help tackle COVID-19. He subsequently received a request from a local hospital to build another handwashing station, which he sold for 3,500 Kenyan shillings (US$33).

James Wamukota, Stephen’s father, who works as an electronics technician, says he had not imagined his son could build such a device and was surprised to come home from work to find the boy had used timber meant for making a window to build it. He helped his son tighten it and make it more functional and shared the story on Facebook, where it went viral. 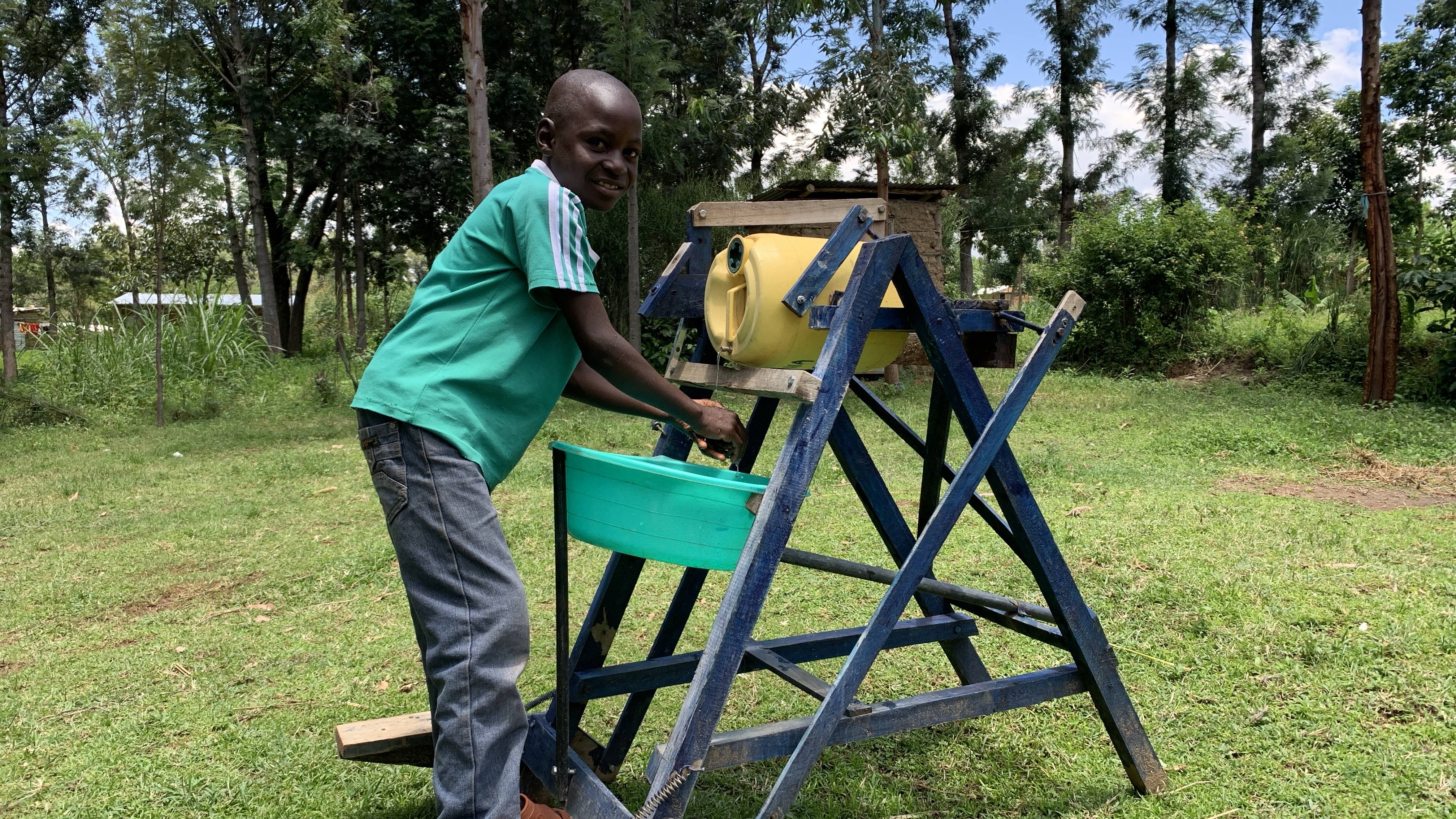 “My son is now seen as a hero. We get many visitors from all over coming here to see his innovation, including international journalists and even doctors,” Stephen’s father said.

“I think if he gets the support, he can make more of these stations and supply them to schools and hospitals. That would help ensure hygiene in the community and fight diseases like COVID-19.”

Globally, over 1.8 million children under the age of five die every year from diarrheal diseases and pneumonia, according to data from the US Centers for Disease Control (CDC).

The report goes on to state that regular handwashing with soap and water could protect one out of every three children who get sick with diarrhoea and one out five that suffer respiratory infections like pneumonia globally.

The Kenya Sanitation and Hygiene Improvement Programme (K-SHIP) implements WASH projects across the country that encourage regular handwashing at home, in schools and in health care facilities. The program focuses on supporting the provision of sanitation facilities such as toilets and handwashing facilities and also hygiene-related behaviour change and advocacy.

“I think this is an opportunity for innovations like these my son made to supply families with low-cost handwashing stations,” said James Wamukota.

Madagascar schools weigh in on the reopening amid hygiene fears

Nielsen Andrianomenjanahary, a student at a public higher education institution, fears his school could become a hotspot for the...

The historic clean movement led by the Government of India has benefitted more than 45 lakh households across the country with a tap...