The Government of Togo has officially launched the national movement to boost sanitation and end open defecation, together with the United Nations Children’s Fund (UNICEF) and WSSCC’s Global Sanitation Fund (GSF). 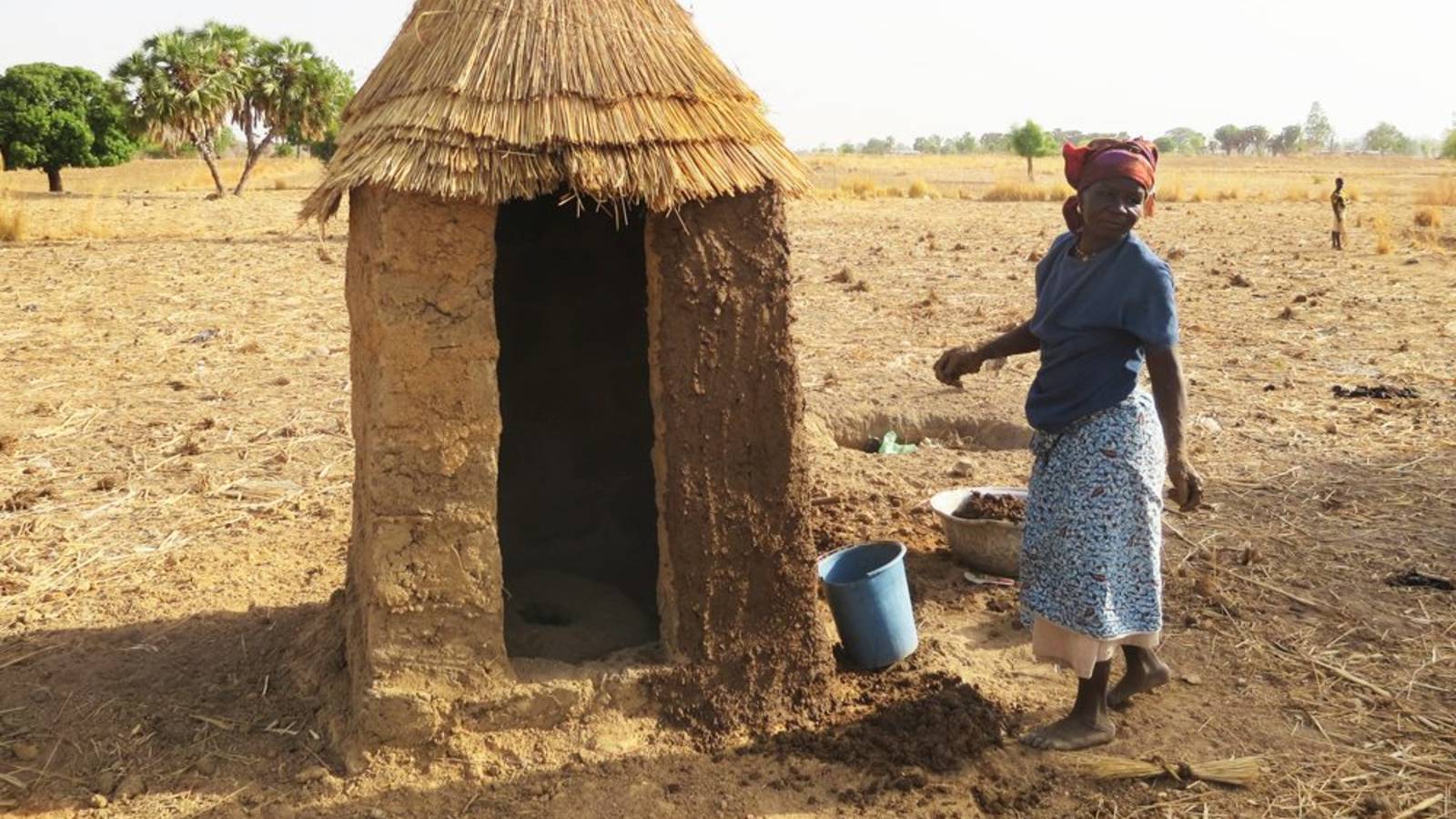 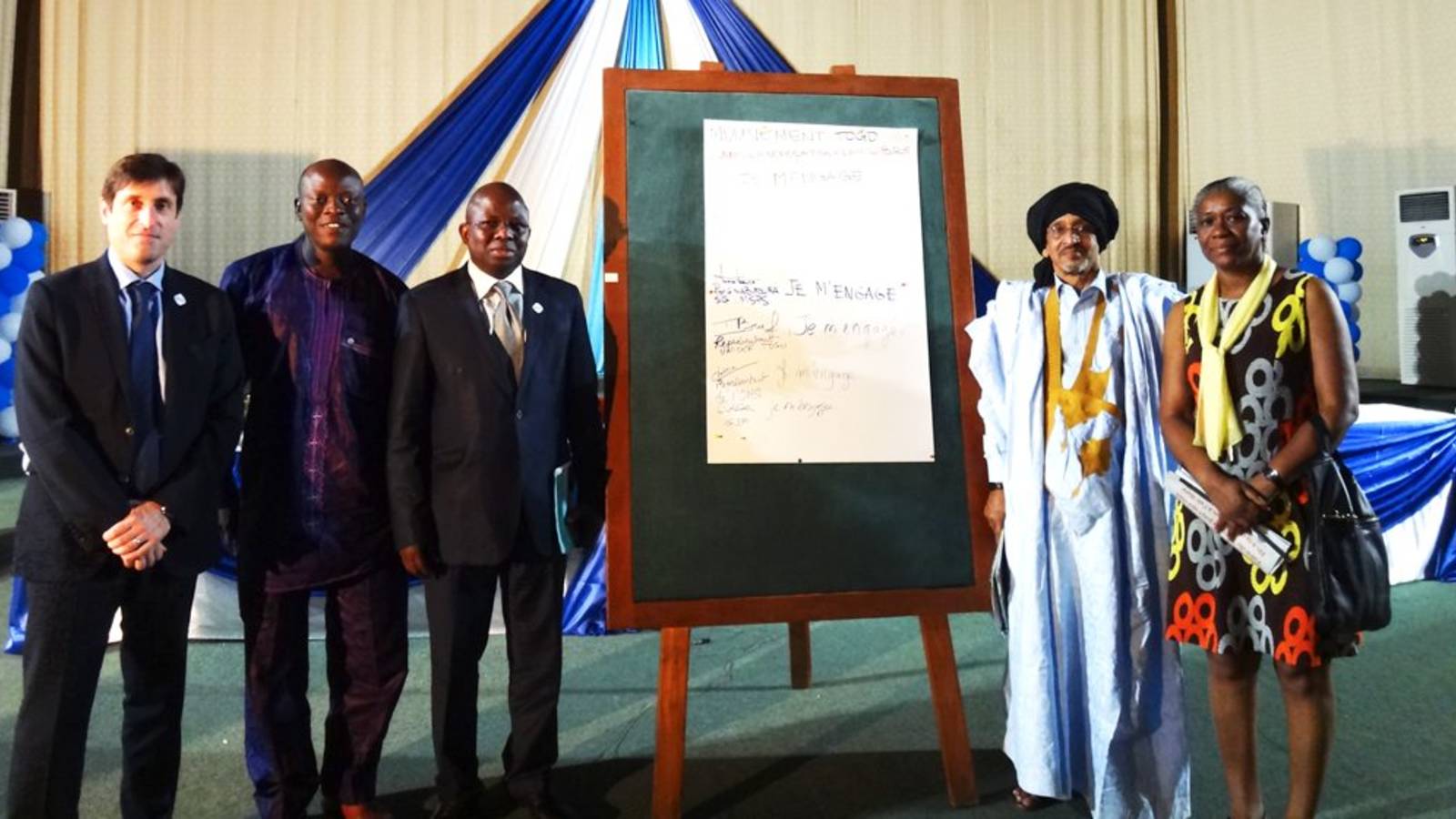 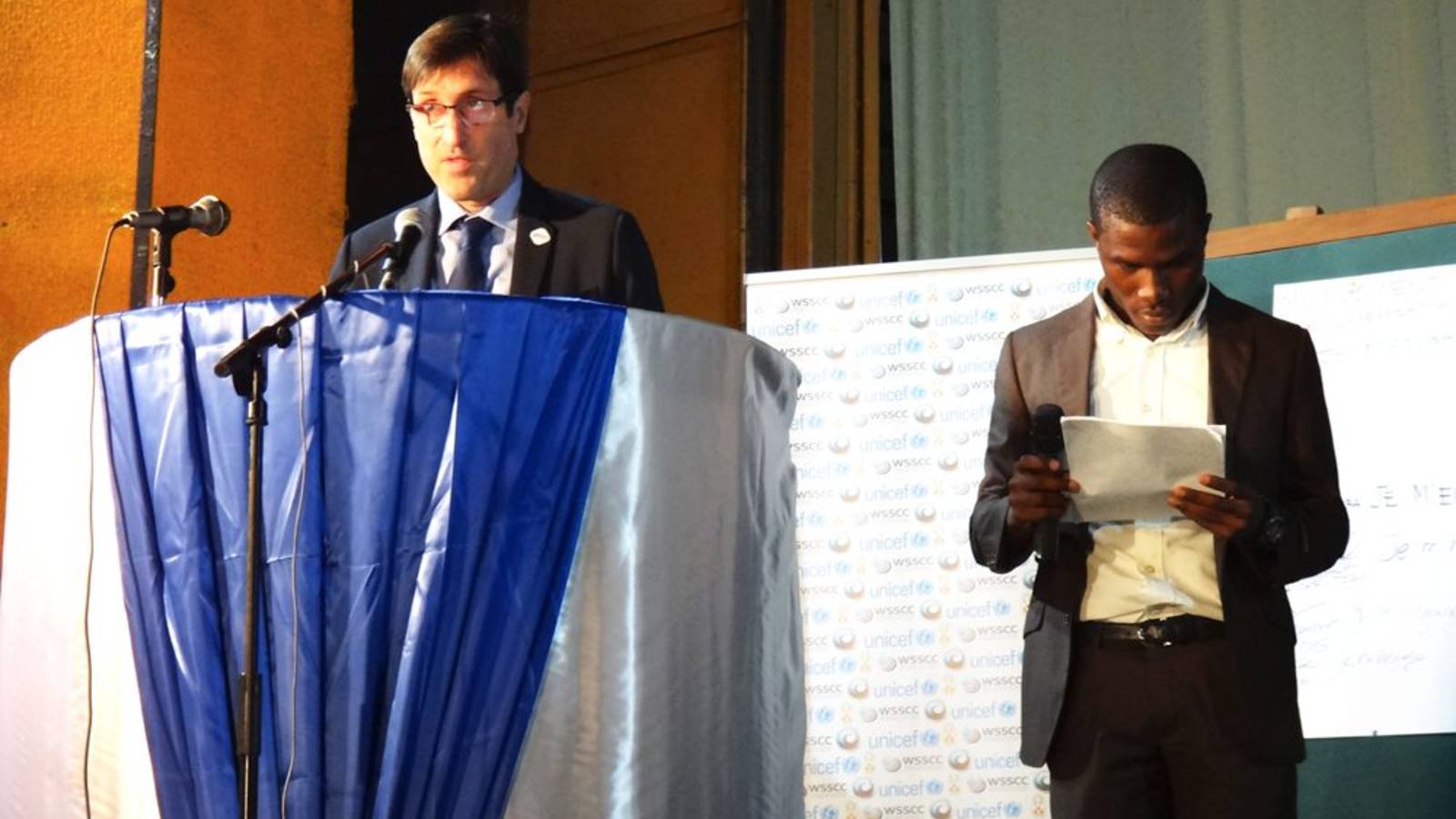 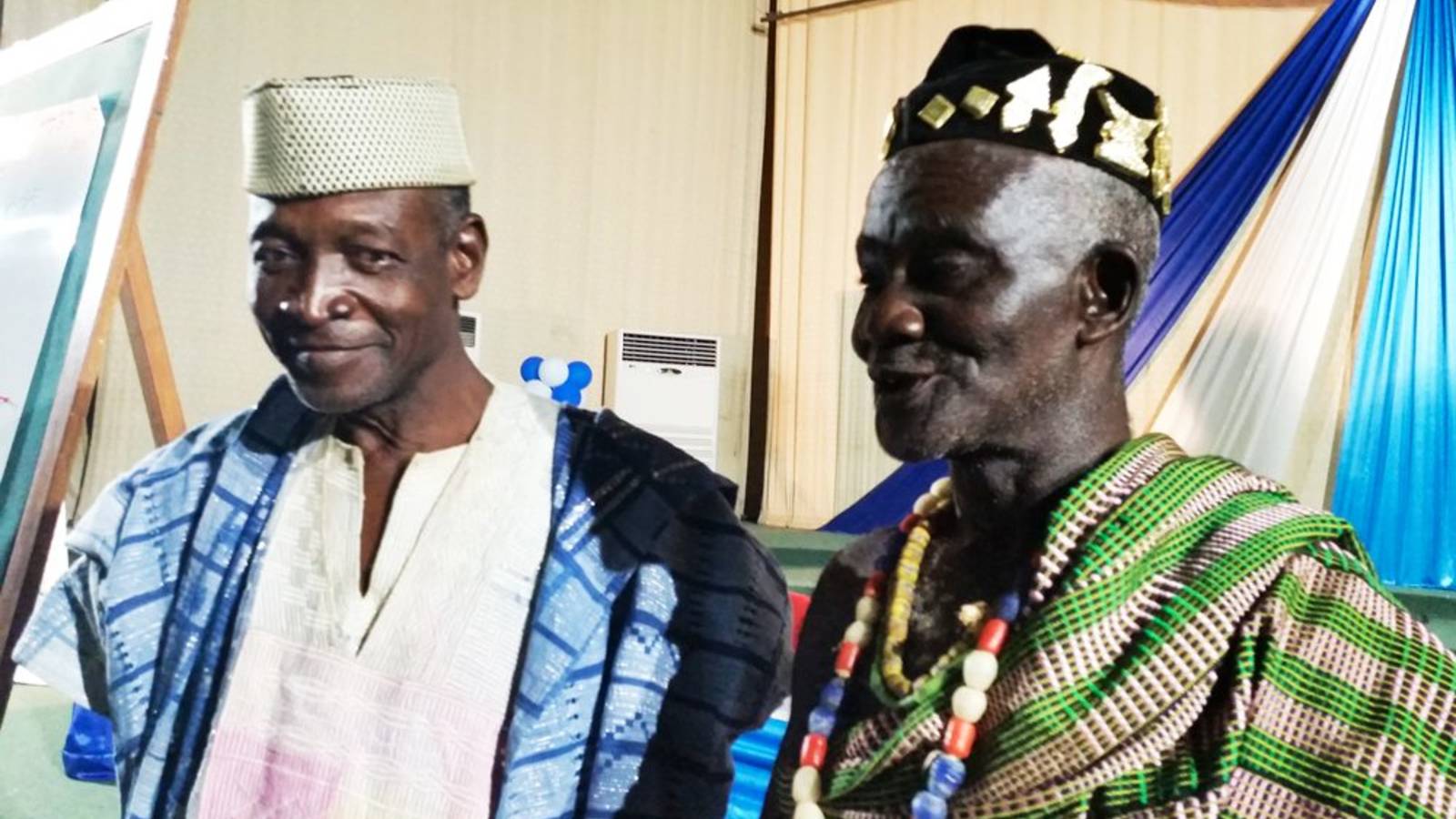 The GSF-funded programme in Togo supports the Togo SANDAL movement to boost sanitation and end open defecation across the country. Credit: Fataou Salami

Officially called ‘Togo Sans la Défécation à l’Air Libre (‘Open Defecation Free Togo’) or ‘Togo SANDAL’, the movement was launched at an event on 11 December at the Palais des Congrès in Lomé, attended by government and United Nations officials, local and traditional leaders and a range of other GSF partners. Togo SANDAL is a sector-wide initiative led by the Government of Togo to ensure that the Togolese people have sustainable and equitable access to sanitation and hygiene, and to end open defecation. The ultimate vision of Togo SANDAL is that no Togolese should have to involuntarily eat faeces.

The event also launched the second phase of the GSF-funded programme in the country, which is a key contributor to the Togo SANDAL movement and serves as a catalyst to demonstrate that achieving large-scale sanitation coverage with speed and quality is possible. It is envisaged that other sector partners can replicate the GSF model or elements of it and thereby contribute to improving the sanitation situation in Togo.

UNICEF is the Executing Agency for the GSF-funded programme, working closely with the Ministry of Health and Social Protection, sub-grantees implementing the programme on the ground, and diverse actors across the sanitation and hygiene sector.

The event included an ‘institutional triggering’ session, which was aimed at generating commitment and immediate action from authorities present to join the Togo SANDAL movement. Institutional triggering makes participants realize that as long as open defecation persists in their communities, they will continue to involuntarily eat faeces, which has a negative impact on their health and dignity. This realization provokes feelings of disgust, fear and shame and as a result, drives commitment and immediate action by the authorities. Following the triggering session, high-level representatives from the various groups participating in the event were asked to publicly sign a commitment to end open defecation in the country (see previous picture).

The event also included presentations on Togo SANDAL and the GSF-supported programme in Togo, as well as speeches from traditional leaders.

Working together to combat the sanitation crisis

“Big problems, like the global sanitation crisis, require big solutions. Therefore, we see the Togo SANDAL as a national movement to end open defecation, with the ultimate goal that the Togolese population should no longer involuntarily have to eat shit. This national movement will carry everyone along, rich and poor, women and men, old and young, rural and urban populations, to ensure that no one is left behind, just as the recently adopted Sustainable Development Goals confirm.

“We accompany you to improve your sanitation situation. However, I would like to emphasize that the Togo SANDAL is not owned by the GSF or UNICEF. It is owned by you. It was developed in Togo, by the Togolese and for the Togolese people. It is a national initiative that we fully support.

For the dignity of the Togolese population and with a vision where no Togolese will have to involuntarily eat shit, we encourage you to develop a road map for the Togo SANDAL. Use the GSF as a catalyst to demonstrate that sanitation coverage at scale with quality and speed is possible, and that this does not have to cost very much.” Read his full speech

Local leaders reflect on their journeys and celebrate success

At the event, local leaders from various regions reflected on their journeys towards achieving open defecation free (ODF) communities, highlighting challenges and successes.

“I am proud of what my people have achieved and Kpinzinde will be the first Canton to be declared ODF in Togo”, said Sama K. Batcharo, Chief of Kpinzinde Canton in the Kara region. When Chief Batcharo’s villages were triggered and communities realized they were involuntarily eating faeces, they all built latrines and handwashing facilities using local materials at a very low cost. Chief Batcharo added: “I will spread this message because no one should have to eat shit anymore.”

At the local health centre in Klabe-Adape village in the Plateaux Region, health workers noticed that the number of diarrhea cases per month dropped from 25 to 10 between 2013 and 2015, after the village was declared ODF in March 2015. The leader of the village, Village Chief Ygwo Komlakouma Mawuena Odue II, reflected on his communities journey, saying:

“When we practised open defecation, people would have to zigzag between piles of shit to harvest the coffee we grow. The rocks close to the river were huge public toilets, it was very dirty.”

He added: “Before, women thought that witchcraft caused children to fall sick and die from diarrhea. Now we know that it is because they were eating shit. I am old, and I have seen that CLTS works, and I am going to trigger the neighboring villages to have them join the movement.”

About the GSF in Togo

Togo faces significant challenges related to sanitation and hygiene. According to WHO and UNICEF, only 12 percent of the total population of over 7 million have access to improved sanitation, and 54 percent practise open defecation.

The five-year GSF-supported programme in Togo works to address these challenges, supporting the broader Togo SANDAL movement. The aim of the programme is to increase the use of latrines and encourage the adoption of good hygiene practices for rural populations in the Savanes and Kara regions, and in five districts in the Plateaux region. In particular, the programme aims to help 1.5 million people create the conditions to live in open defecation free communities, 1.2 million people access improved toilets, and 911,000 use handwashing facilities. The programme began in 2013 and in 2015, it transitioned from the start-up to the expansion phase, in which CLTS activities are being scaled up across target regions.

Read more about the programme

Schools and districts strengthen the fight against open defecation

The “Je m’engage” campaign reaches over two million people Connecting the Dots is a new report from WSSCC that highlights the work of...

The satisfaction of having your own toilet: Assana’s story

Assana Bapelim, who lives in the village of Kadjalla in the Kara region of Togo, is proud of the latrine she built with help from her...

In light of the COVID-19 pandemic, WSSCC has provided the country’s partners with guidance about reprogramming, allowing funds to be...