In response to inputs from local community members, a retired public health servant in Tanzania has reinvented a handwashing station for a clean “after-toilet” experience.

Many people are familiar with the concept of “tippy-taps”: a simple, low tech and low-cost method for providing water for handwashing, particularly useful in rural communities without access to plumbed water systems.

Most tippy-taps consist of water-filled plastic bottles activated by a string or a foot pedal that allows a person to pour water without touching the handle or spout.

But tippy-tap technology presents several disadvantages. Plastic bottles go missing, stolen by pupils bringing water to schools or community members storing local liquor. Livestock destroys them while attempting to drink the water inside. Women are not pleased with having their clothing dirtied by water droplets rebounding from the ground, and the elderly, particularly those with tremors, find them increasingly difficult to operate.

Carl Lymo, a retired Public Health Officer with more than 25 years’ service in public health, wanted to find a solution to these challenges.

“A while back when I was on active service, I could find households willing to adopt handwashing but they were stuck amidst the challenges. From there, I started to think on how I could help,” says Carl. 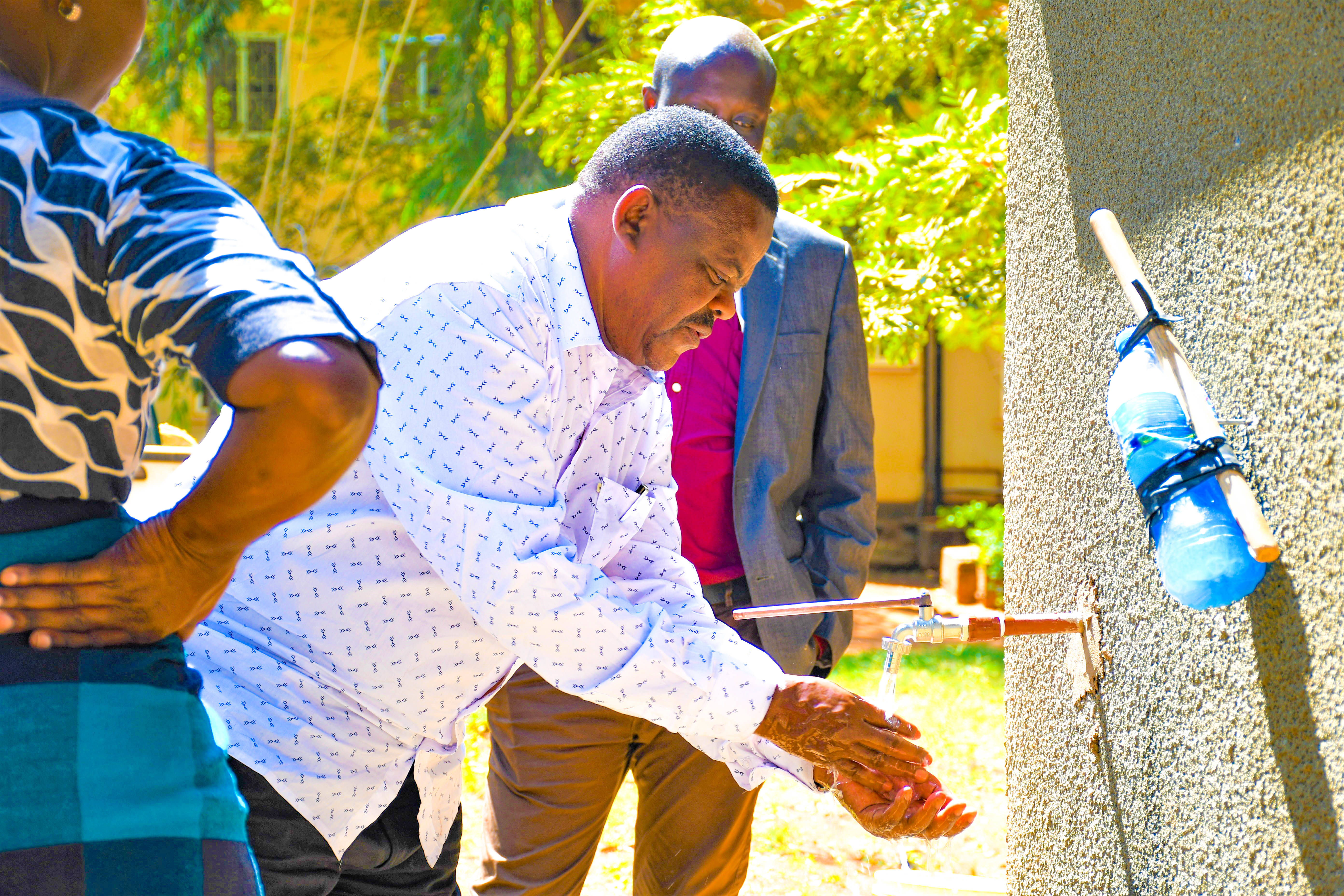 Off he goes for improvement. Carl started looking for a solution that was more secure, more user-friendly, and more sustainable, and that would be cost-effective for rural communities. Once he had a working model, Carl partnered with UMATA, the Sanitation and Hygiene Programme of Tanzania for support to make the technology available across communities.

His innovative solution involved reimagining every part of the tippy tap. Instead of pulling the plastic bottle down to release the water, water is now stored in a bucket inside the toilet facility and flows out from the bottom of the bucket through an extended pipe which passes through the wall of the facility to the exterior to allow users to wash their hands on the outside of the facility.

The pipe is fitted with an elbow tap that is designed to operate in both directions, make it easier to use. And to avoid water splashing up on users, a bowl-shaped hole is dug and lined with pebbles, allowing water to soak into the ground.

Zamili Jumapili Mkinga, a resident of the village of Kitati (Mpwapwa District), finds the innovation safer.

“My grandfather told me a story of a person who wanted to kill a rat with a poison. That person took poison and mixed it with ugali. After that, he went to the tap, washed his hands and proceeded to eat. That person died first before the rat because when he opened the tap, his hands touched the tap and his hands had poison on them. He closed the tap after washing. That person thought he was safe, but he was not since the poisoned hands touched the tap before and after washing his hands. That’s the same way. People could get sick when washing hands from the toilet or anywhere else. I find the elongated-elbow tap is safer as there are no touching other than operating it with biceps,” said Zamili.

“When I had the working-model, I only thought of two districts of Kondoa and Mpwapwa to champion the technology, but UMATA told me they wish for the model to be available across all eight programme districts in Dodoma region,” Carl said.

To date, UMATA has facilitated the production and distribution of 150 alternative handwashing facilities (AHWF) across the programme area.

In this first phase, AHWF has been distributed to one village in each programme district. Households can acquire an AHWF of their own for US$7, and the money will be used to facilitate the production of more AHWFs.

In addition, three local artisans in each district are trained to fit the AHWF in toilets, and UMATA plans to increase the capacity of local artisans to assemble AHWF using locally available materials so as to make the technology more affordable.

UMATA is supported by WSSCC’s Global Sanitation Fund. It is part of Tanzania’s National Sanitation Campaign which is led by the Ministry of Health, Community Development, Gender, Elderly and Children.

The programme is implemented by Plan International as the executing agency in partnership with Local Government Authorities. As WSSCC evolves into the Sanitation and Hygiene Fund, two of its strategic objectives will be to support national plans to expand household sanitation and foster innovative sanitation solutions.

Remembering Rehema: A Passionate Champion of Menstrual Health and Hygiene in Tanzania

High precipitation across East Africa attributed to unusually warm Indian Ocean By Aidani Tarimo and Charles Dickson As welcome as...