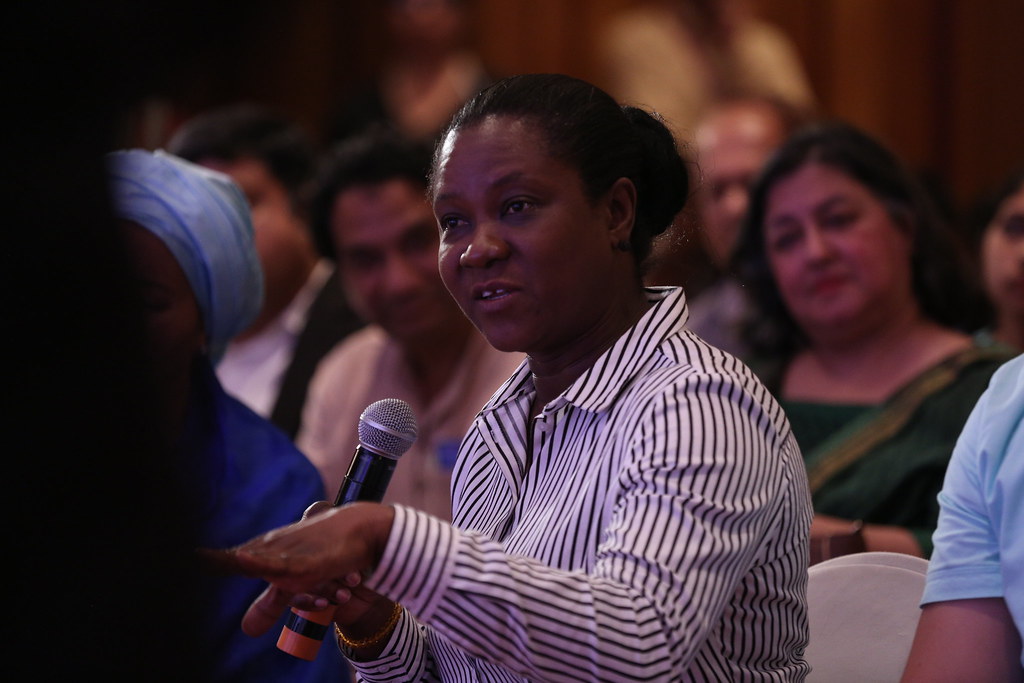 The summit brought together citizens from across India who are often silent and/or invisible in the SBM conversations and programming—elderly men and women, third gender persons, deaf, blind people, adolescent girls and boys, and others.

“Government needs to listen to those that usually have no voice – it is only through listening to those of different ages, gender, socioeconomic status, and privilege that government officials can truly understand the concept of inclusive development,” said WSSCC’s Chair and Minister of Environment of Nigeria Amina J. Mohammed.

The summit’s sessions followed a ‘Speakers Corners’ model with breakout sessions bringing out the different represented voices to share their issues, experiences and ideas for progress.

“To bring together separate conversations by different constituencies, different stakeholders who never meet, to come together to share their individual aspirations and goals for a clean India, to understand that these actually shared aspirations the same goals, the same vision and the same dreams and then to work together to really bridge that gap, bridge this divide for joint action to achieve this shared vision of a clean India,” said WSSCC’s Archana Patkar, an expert in equality and non-discrimination issues.

The SBM has created unprecedented momentum around the issue of sanitation and hygiene in India, and is recognized globally as a leading movement to foster change.

"Swachh Bharat Mission is essential for the dignity, well-being, and health of the citizens of India. In every country, the veil of silence around sanitation and menstruation contributes to sexism that can hold women back in their personal lives and professional careers,” said Poonam Mahajan, Member of Parliament from Mumbai North Central and a politician of the Bharatiya Janata Party.

WSSCC has been instrumental regarding field operations, essential to the practical realization of SBM through the Global Sanitation Fund (GSF), in working with State Governments with high open defecation rates to establish the modalities for implementing collective behaviour change at scale.

In a country where 44% of the 1.27 billion people still defecates in the open, the absence of safe and hygienic sanitation largely affects marginalized groups such as sanitation workers, youth and adolescents, the elderly, transgender persons, people with motor disabilities and the visually and hearing impaired.

As a step towards addressing equity and inclusion in sanitation and hygiene WSSCC held consultations in 2015 with marginalized groups in South Asia, part of the preparation for the South Asia Conference on Sanitation (SACOSAN VI), held in January 2016 in Dhaka, Bangladesh.

This resulted in The Leave No One Behind campaign of consultations with marginalized and vulnerable groups in South Asia in collaboration with the Freshwater Action Network South Asia (FANSA).

The Sanitation Action Summit was another milestone in the Leave No One Behind process, by bringing together policymakers, representatives from marginalized communities, and global citizens to share experiences and identify solutions that help enable a truly open defecation free India by 2019.

WSSCC and its partners seek to build voice and agency leaving “No One Behind”, through a dialogue on sanitation so that the disempowered and stigmatized know their rights, their roles and can ask constructively for their entitlements in their society.

“We would take this step further, we shall spread the awareness about cleanliness and why it is important.  So through this we would promote hygiene and we will prevent diseases and infections. Consequences of avoiding cleanliness will also be shared,” said a female participant after the summit.