In the drive to end open defecation, one of the strengths of Community-led Total Sanitation (CLTS) is its reliance on local knowledge, collective action and community leadership. To ensure that nobody is left behind, WSSCC is proposing ways to make CLTS even better at reflecting the needs of people who may be overlooked or marginalized within communities. 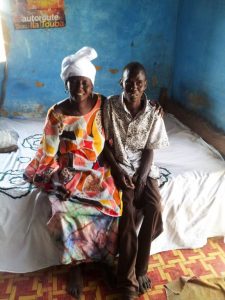 A handbook published recently by WSSCC aims to help CLTS facilitators take a more proactive role in ensuring that people who may be disadvantaged are included. The Equality and Non-Discrimination Handbook for CLTS Facilitators, published in mid-2019 by WSSCC, offers step-by-step guidance in applying EQND principles during pre-triggering, triggering meetings, and post-triggering follow-up visits, as well as practical tools that can be used in communities.

“It cannot be assumed that CLTS is automatically inclusive and that ODF status includes everybody,” says Patrick England, WSSCC’s Knowledge Management and Innovation Support Officer.

England cites a 2017 Scoping and Diagnostic Study of Global Sanitation Fund-supported programmes by WSSCC that assessed whether collective behaviour change interventions adequately involve the voices of the people who may be the most disadvantaged. The independent study shed light on how power dynamics within communities can produce patterns of exclusion, marginalization and voicelessness, resulting in the needs of some of the most vulnerable people not being represented in even the best-intentioned efforts.

People with disabilities and those living in poverty are more widely recognized as needing extra support however there are other people who face multiple layers of disadvantage which the study drew attention to (see categories of disadvantage). 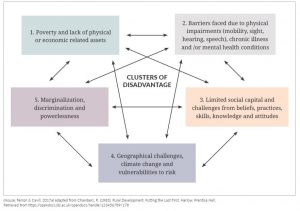 Emphasizing that more proactive attention is needed to ensure no one is left behind, the study identified a wide range of voices that often go unheard: people with disabilities, children without adult support, older people without family support, women and girls, people living in the street, sex workers, people struggling with drug or alcohol abuse or mental illness, refugees and internally displaced people, people living in precarious environments such as those vulnerable to climate change, among many others.

“What the handbook tries to do is provide facilitators with a systematic way to understand the different patterns of vulnerability that can exist within a community and offer a variety of tools that have been tested in other settings that can be used in raising the voices of people that aren’t normally heard during community meetings,” says England.

There are also techniques that can be employed to help community members better appreciate the struggles and barriers that disadvantaged people may face. One such technique, developed by Hazel Jones and Jane Wilbur from WEDC and WaterAid, involves role playing different types of characters in the community.

“Somebody has their leg bound up with sticks pretending to be somebody with a mobility impairment, someone has a pillow in a sack strapped to their belly imitating someone who is pregnant, someone is blindfolded to simulate being visually impaired – and they all try to squat over a mock latrine on the ground, putting themselves in the other person’s shoes,” England explains.

“It is such a simple exercise, but their minds are blown over how difficult it can be for some to use a facility. I am always surprised at what a great tool that is, and it is just one of the tools we have included in the handbook,” he says.

Two other documents of excellent reference include the Human Rights Principles and Terminology – Equality and Non-Discrimination: Supporting the Human Rights to Water and Sanitation (WSSCC, SNV and UTS) and Guidance and Tips for learning from people who may be most disadvantaged during the programme process (WSSCC) both collated by Sarah House.

As well, check out new resources published by the CLTS Knowledge Hub:

French version of the Handbook available the end of September.