The international community is showing its commitment to making sanitation a global development priority by recognising ‘World Toilet Day’ (WTD) on 19 November as an official United Nations day for the first time, a move welcomed by the Water Supply and Sanitation Collaborative Council (WSSCC).

Worldwide, some 2.5 billion people, or more than a third of the world’s population, do not have access to proper sanitation. Of these people, around 1.1 billion still defecate in the open. Working for this situation to end is WSSCC, a UN-hosted organisation for sanitation and hygiene issues. 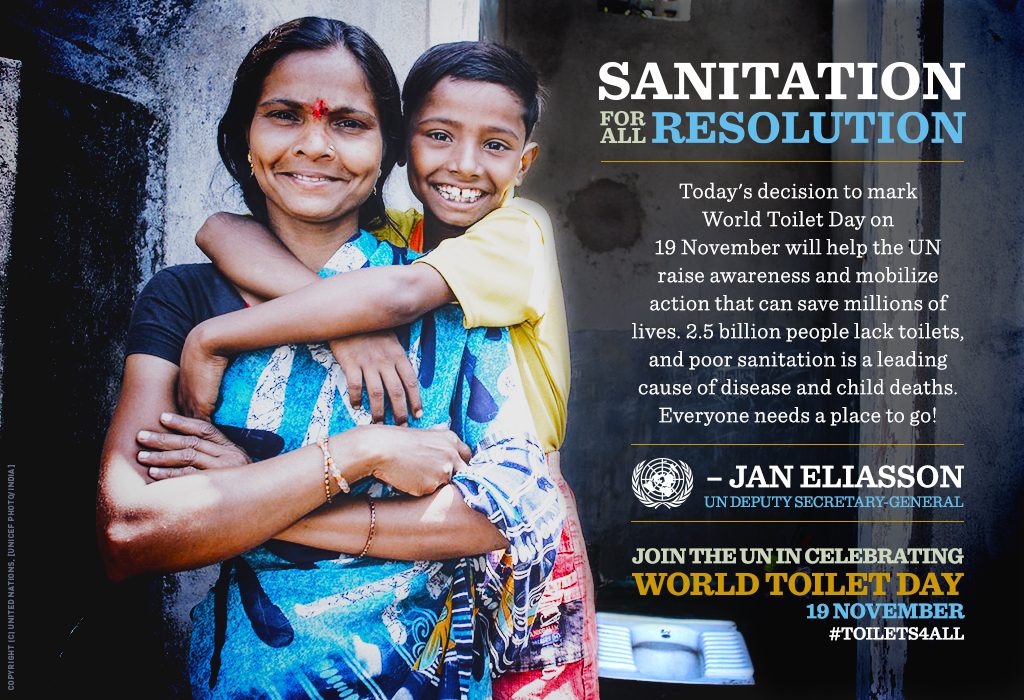 Tanya Khan, the WSSCC coordinator in Pakistan, will be one of the panellists participating in a WTD event at the United Nations in New York on World Toilet Day. The Permanent Mission of Singapore to the UN is organising this event to raise awareness on sanitation issues.

“UN-backing for World Toilet Day is a huge step towards tackling the desperate need for action to improve sanitation for the world’s poorest people,” highlights Ms. Khan.

To mark the first UN World Toilet Day, WSSCC, together with water and sanitation charity WaterAid and consumer goods multi-national Unilever, is releasing a new paper titled “We Can’t Wait”. The organisations will simultaneously release the report on 19 November, including at www.wsscc.org.

The report highlights the stark consequences for women and girls of the lack of access to toilets or use of good hygiene practices. One in three women worldwide risk shame, disease, harassment and even attacks because they have nowhere safe to go to the toilet and 526 million women have no choice but to go to the toilet out in the open. Women and girls living without any toilets spend 97 billion hours each year finding a place to go.

“For the world’s poorest women and girls, a decent toilet has more than just health benefits,” says Ms. Khan. “For them, a clean and private toilet is a matter of basic safety and dignity.”

WSSCC is also collaborating with the NGO Wash United to support its “Celebrate the Toilet” campaign.

World Toilet Day has taken place as a civil society celebration on 19  November each year since 2001. But with the unanimous adoption of a new resolution in July, the day became a UN-official day for the first time this year.

Find out the WE CAN'T WAIT report here.

For more information about the UNICEF campaign: www.unicef.org/toilets4all