Executive Director Chris Williams represented WSSCC at the event, reinforcing WSSCC’s mandate that supports Sustainable Development Goal 6.2  - By 2030, achieve access to adequate and equitable sanitation and hygiene for all and end open defecation, paying special attention to the needs of women and girls and those in vulnerable situations.  In particular, he stressed the importance of achieving equality at scale, highlighting the need to combine policy advocacy on equality and non-discrimination with direct implementation of community-based methods that bring about changes in behaviour.

Since 2015, WSSCC through its  Global Sanitation Fund (GSF)  has  committed USD 7.4 million towards the Kenya Sanitation and Hygiene Improvement Programme (K-SHIP). More recently, it has facilitated a series of intensive trainings on menstrual hygiene management that have inspired a policy regime more sensitive to the needs of the disabled, the elderly, and marginalized groups, as well as women and adolescent girls.  These operational and normative initiatives are anchored in the National Inter-Agency Coordination Committee on Environmental Sanitation, led by the Ministry of Health.

K-SHIP reduces disease burden resulting from poor sanitation and hygiene, while helping to improve health outcomes and increase school attendance rates in 11 counties of the country.  A key component of the programme is to empower people to embrace the links between sanitation and health, hygiene and human dignity so that they live in a clean and healthy environment with adequate and appropriate sanitation facilities.

Currently, only 12 per cent of Kenya’s 45.5 million people live in open defecation free (ODF) environments.  K-SHIP, which is implemented by AMREF Kenya, plans to guide a further 200 communities, or 755,400 people, to live in ODF environments by 2019.

The GSF adopts a number of community-led approaches for achieving ODF, particularly the highly effective behaviour change methodology called Community Led Total Sanitation (CLTS). Programmes like K-SHIP have empowered more than 13.2 million people to end the practice of open defecation, invest in sanitation and adopt hygiene practices in the 13 countries where the GSF is operational. 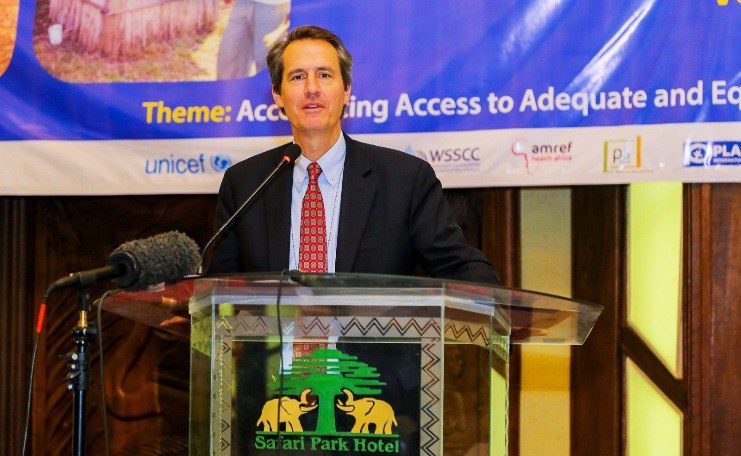 Dr. Williams delivered the keynote address at the Conference’s closing session, outlining that ODF status can be achieved at scale by involving decentralized government units for fast and efficient CLTS delivery. Later, he paid a courtesy call to the Cabinet Secretary of Health, Dr. Cleopa Mailu and held further discussions on K-SHIP’s role in contributing towards the ODF Roadmap for Rural Kenya.