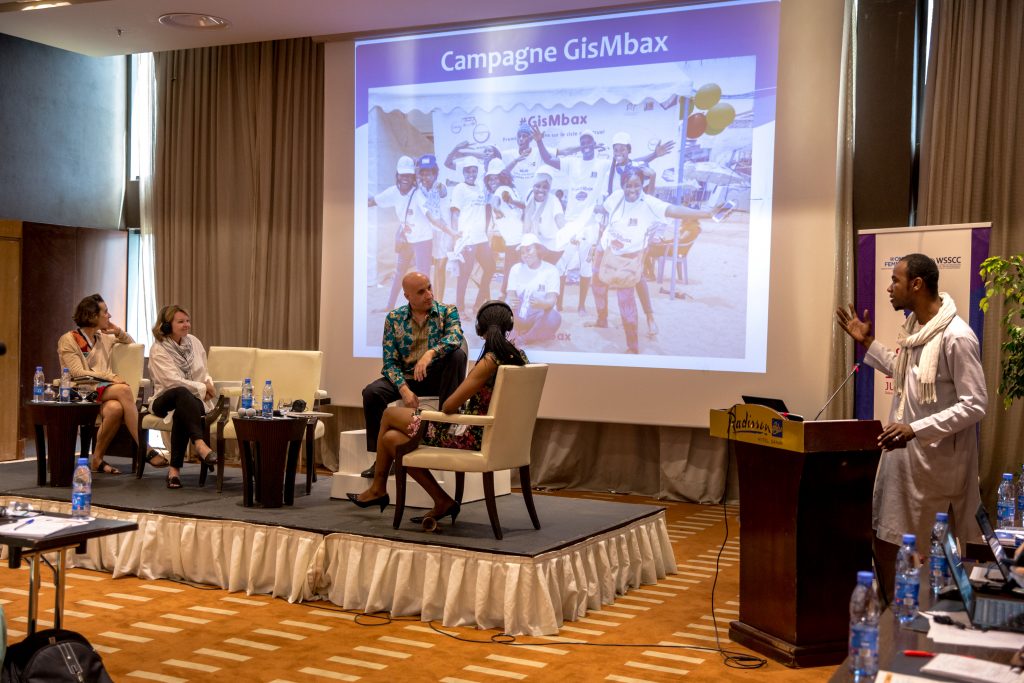 In May 2018, the Water Supply and Sanitation Collaborative Council (WSSCC) sent its members a call for proposals to submit an innovation that they had designed to reduce gender inequalities in Water, Sanitation and Hygiene (WASH). The best candidates would receive sponsorship from the WSSCC to attend the regional conference on reducing gender inequalities in the WASH sector, an event organized by the WSSCC, in conjunction with the United Nations Entity for Gender Equality and Women’s Empowerment (UN Women). Out of over 30 proposals received, three members were selected to receive the members’ innovation award in 2018:  Imad Agi of ECOLOO from Sweden, Olivia Boum of KMERPAD from Cameroon and Leisa Hirtz of Women’s Global Health Innovations from Canada. They were provided with an exhibition space to showcase their innovations, which took place before the closing ceremony of the conference. Each member had the opportunity to present their innovations in detail and answer questions from technical experts and national officials, such as the First Technical Advisor of the Ministry of Water and Sanitation of Senegal.

Video interview of all three winners.

For all three winners, the motivation for creating these innovations was to positively impact the lives of women and girls. Imad Agi, Chairman and CEO of ECOLOO, a biological sustainable solution that uses special formulated bacteria to turn human waste into natural fertilizer, was moved by the plight of poor Indian women in a documentary he watched many years ago. Women were practicing open defecation and collecting human waste with their bare hands for just a few rupees a day. “The lives of those poor women were miserable and short. That was the motivation behind the creation, research and development of this toilet technology which we feel very passionate about,” Mr. Agi stated.

Similarly, Ms. Hirtz, Founder and Executive Director of Women’s Global Health Innovations, wanted to create a device that would allow adolescent girls – especially those without access to clean water –  to manage their menstruation discreetly and with dignity. “I was inspired to innovate and specifically create an antibacterial menstrual cup that would be easier for girls to use, clean and maintain, while being affordable and having a low impact on the environment,” said Ms. Hirtz about her innovation, the Bfree menstrual cup.

Conversely, Ms. Boum of KMERPAD, decided to use a non-traditional but creative approach to educate boys and girls about menstruation. She realized that the topic of menstruation was still considered a taboo in her home country, Cameroon. “I found this attitude unacceptable and decided to act. We realized that we could not educate girls and boys using traditional means of communication, which is why we decided to digitalize menstruation education by using Facebook and WhatsApp groups as tools to reach the unreachable,” said Ms. Boum.

Although each innovation has been successful, the journey towards their development was beset by impediments. Some major challenges included the lack of financial resources and a general low interest for their development. “There is a paucity of funds directed towards women-led social impact initiatives,” says Ms. Hirtz. “Furthermore, even with the highest quality standards in place, country approval for menstrual cups remains elusive. Formal channels of approvals for import are still in the process of development.” Mr. Agi echoed similar sentiments, adding that there was a lack of interest in sustainable solutions due to issues with pricing, as his innovation was always compared to other non-sustainable solutions, such as pit latrines and flush toilets. Similarly, Ms. Boum realized that the lack of financial capital meant that she and her team could not help all women and girls in Cameroon.

Eventually, each winner received support for the implementation of his/her innovation, but they all agree that increased visibility, networking and collaboration with key stakeholders at the global level on the Sustainable Development Goals are beneficial in amplifying the work of their respective innovations – all of which the winners achieved by participating in the regional conference.

Nevertheless, more work lies ahead for WSSCC members’ innovation award winners. Inspired by the discussions at the conference, Ms. Boum said: “We have been inspired by all the participants to achieve more. We want to develop our digitization programme for menstrual hygiene management in Cameroon and Africa, and are looking for opportunities to fund the next edition.” Similarly, when asked about what he learned from the conference, Mr. Agi said: “I learned a lot from the conference, including things I have never heard of, such as Menstrual Hygiene Management.” Moving forward, he and his team plan on adapting their technology to address issues raised during the conference within certain African countries.

Likewise, Ms. Hirtz learned at the conference that even though women are universally eager to engage in seeking solutions to improve their own personal health, there are gaps in research between English-speaking and French-speaking sub-Saharan African nations. “We will continue to innovate, work hard and develop partnerships to deliver education and product choice at an affordable price to those in the greatest need,” Ms. Hirtz said regarding her next steps. “We are also in the development stage of a second product, the Bfree duo, a dual menstrual cup and cervical cap contraceptive barrier.”

Championing women through the work of the Global Sanitation Fund

As part of our International Women’s Day celebrations this week, wsscc.org is highlighting the work that WSSCC does to promote gender...

The Water Supply and Sanitation Collaborative Council (WSSCC) Community of Practice on Sanitation and Hygiene in Developing Countries...

Cameroon recently adopted two national strategies that explicitly include MHM in their goals One of the policies signed by the...