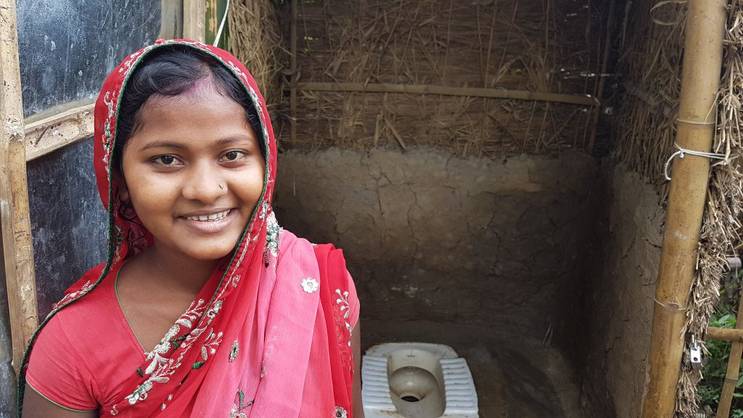 In light of the COVID-19 pandemic, WSSCC has provided the country’s  partners with guidance about reprogramming, allowing funds to be directed to preventing, delaying and containing COVID-19 in line with government and advice from the World Health Organization (WHO). More detailed country information can be found here.

In 2019, the Global Sanitation Fund (GSF) programme in Nepal continued to support the coordinated national strategy of finishing the “last mile” of the country’s sanitation campaign. In 2019, a total of seven more districts were brought to Open Defecation Free (ODF) status. The programme also continued to ignite broad-based movements for improving sanitation and hygiene at the local level, providing technical and strategical support for sector strengthening at the national level.

Over the last four years, the programme successfully contributed to accelerating sanitation coverage from around 13% to near-universal coverage in eight districts of the Terai region, overcoming the most daunting socioeconomic challenges.

Building local ownership and mobilizing local actors were crucial in the push for the last mile in the Terai region, where government entities, community organizations and individuals were engaged as front line actors, volunteers and champions of the cause. WASH Coordination Committees were led by local governments, composed by a wide variety of government and non-governmental entities, and were responsible for overseeing the planning, implementing, and monitoring of the Sanitation Campaign.

An important factor for success in the Terai was building coalitions of sanitation champions and influential local leaders to form the nucleus of these committees prior to the commencement of the campaign. As well, the programme promoted a match funding mechanism, whereby GSF would match contributions from local governments, encouraging local governments to take leadership of the process.

The heart of Nepal’s sanitation campaign is rooted in a movement of facilitators working in a door-to-door behaviour change campaign – known in Nepal as ‘Local Led Total Sanitation’. Organizing this immense number of actors was critical. In the Terai, the GSF Nepal programme utilized a new structure involving community volunteers, local facilitators, and area coordinators to quickly get to scale. Supporting people who are unable to build a latrine on their own was also vital. Successful strategies included long-term planning and budgeting beyond programme timelines, hiring facilitators with in-depth local knowledge, encouraging community-based support, and targeted advocacy towards landlords to allow latrine construction for their tenants.

While Nepal’s sanitation campaign has nearly ended open defecation, continued support is needed in districts with ODF status to sustain positive sanitation and hygiene behaviours. This is even more true as the country is gearing up towards the next phase of the national sanitation campaign,which includes achieving universal access to safely managed services, prioritizing the needs of vulnerable communities and households.

Nepal transitioned to a new federal system from 2019. Following this administrative shift, capacity support on WASH is needed to ensure effective coordination between levels of government, support the transition to new roles and responsibilities at the subnational level and address a lack of human resources, which has led to weakened capacity on WASH at provincial and local government levels.

Therefore, in line with the country’s challenges, the GSF programme, now in its final year of implementation, will both focus on sustaining the outcomes achieved and on the operationalization of the government’s total sanitation guidelines that are intended to move the country beyond ODF, to safely managed sanitation. Particular attention will be given to target areas that reached the ODF milestone in 2019 (last mile areas) to ensure sustainability. Additionally, the programme will continue to provide technical support on total sanitation plans to the government, and invest in capacity building at the subnational levels, focusing on the Palikas, or the country’s municipalities.

The African Civil Society Network on Water and Sanitation (ANEW) is a regional networking body of African civil society organizations...