India may be the world’s largest democracy, with 815 million eligible voters with access to the ballot. Much less a source of pride is the fact that, historically, so few Indians have access to a toilet.

This situation is changing fast, however.

As of 2014, for 550 million people in India with no toilet access, open defecation was widespread. Contamination of soil and water and exposure to disease and illness contrived to arrest all hope of escaping poverty’s grip.

Now, just four years later, the Government of India reports that the number of people in India with access to toilets has grown by 400 million. It is a dramatic change for the better, but how did this happen?

In fact, it has been a long time coming. While leading a non-violent movement for India’s independence from the British in 1947, Mahatma Gandhi spoke about the need to improve hygiene and cleanliness in the country. “Sanitation is more important than political independence,” he said. Last month, in an address on waste management and cleanliness, India’s President Pranab Mukherjee, reiterated Gandhi’s decades old exhortation.

Ministers and sanitation sector leaders from around the world will come together later this week at the Mahatma Gandhi International Sanitation Convention (MGISC) in New Delhi. Hosted by the Government of India, this 4-day event will be an opportunity for participating countries to share sanitation success stories and best practices.

The convention will culminate 2 October with the launch of Mahatma Gandhi’s 150th birth year celebrations, and will also mark the beginning of the final year of the Swachh Bharat Mission (SBM) or Clean India Mission -- the intensive behaviour change campaign launched 2 October 2014 by the Prime Minister of India, Mr. Narendra Modi.

It is incredible to see the progress thousands of communities across the country are making in rendering previously dysfunctional toilets functional again and building new toilets by the thousands, with many projects benefitting from the crucial engagement of women. Their achievements, setbacks and the lessons from experience in bringing improved sanitation and hygiene to the lives of almost one-sixth of the global population are forming an important chapter in India’s history and, dare I say, the world’s. The achievements are also contributing to India’s efforts to bring down under-five mortality, an effort recently lauded by the World Health Organization (WHO). 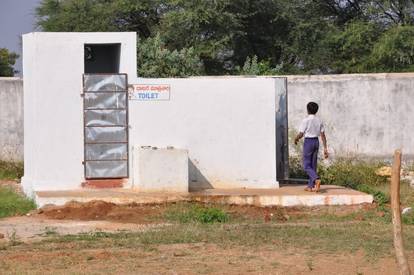 The importance of political leadership at the highest level in India cannot be understated. In fact, it serves as an example for other world leaders to address the plight of the poor. Prime Minister Modi has put the commitment of the highest office behind addressing an issue that too often receives the lowest priority in many countries - a chance for the poorest to escape the poverty cycle through providing the most basic of human services.

The challenge is not India’s alone, but one shared with many countries. According to the 2017 WHO/UNICEF Joint Monitoring Programme on Drinking Water and Sanitation report, there are 2.3 billion people without a basic sanitation service, 892 million who practice open defecation, and 1.8 billion whose drinking water could be contaminated with faeces.

Accordingly, the globally agreed ambition articulated by United Nations Sustainable Development Goal 6 is to ensure the availability and sustainable management of water and sanitation for all by 2030. However, a report published in July by UN Water shows that the target for sanitation and hygiene, with special attention to women, girls and those in vulnerable situations, is still off-track. Political will is needed to drive change at the highest levels.

In New Delhi, with ministers representing over 50 counties, and other high-level dignitaries from international development organizations, we will exchange insights and build our collective capacity to provide the world’s poorest and most vulnerable people with such basic needs as access to toilets, just one of the many preconditions to building the greater peace we all seek.

Important new resources from our work in India, Cambodia and with IDS

Important new resources from our work in India, Cambodia and with IDS The new CRSHIP report from Cambodia addresses WASH challenges...

For being the best of more than 140 entries submitted from 40 countries, the winning journalists will travel to Stockholm, Sweden...