Over 50 countries joined the SWA partnership’s High-level Meetings in Washington on April 19th and 20th, including India, China, Brazil and Indonesia. Forty ministers plus representatives from civil society, research and learning, donors, and the private sector were among over 200 delegates gathering to share practical ideas and experiences.

“Sustainable Development Goal 6, to ensure availability and sustainable management of water and sanitation for all, is probably the most challenging to achieve,” said the SWA Chair the Hon. Kevin Rudd in his opening address. “We’re here today to get this one right – to support each other to build a sustainable movement, and bring water and sanitation for all from fantasyland to reality."

The Global Analysis and Assessment of Sanitation and Drinking-Water (GLAAS) 2017 report (WHO/UN-Water) was released to coincide with the meetings. It reveals that countries are not increasing spending fast enough to meet the water and sanitation targets under the Sustainable Development Goals (SDGs). Read more here.

WSSCC's Executive Director Chris Williams participated in the meetings, sharing his recommendations for better investments in Water, Sanitation and Hygiene in this article. 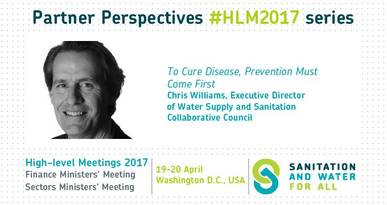 The Hon. Kevin Rudd opened the partnership’s Finance Ministers’ Meeting on April 20th emphasizing that “Sustainable Development Goal 6 may be the greatest non-performer unless we do something radically different”.  He urged finance ministers to see investments in water and sanitation as investments in economic well-being and development.

The Finance Ministers’ Meeting directly followed the SWA partnership’s one-and-a-half day Sector Ministers’ Meeting. The earlier meeting concluded with the SWA Chair reminding delegates “getting our analysis right is critical, but money is what will make it happen.”

More images from the meetings

Menstrual health and hygiene to be taught in Nepali schools

WSSCC is proud to be a co-publisher of an important new sector resource, the Violence, Gender and WASH Toolkit. This multimedia...