As a passionate WASH advocate, Daniel engages in all of these activities –often  under challenging circumstances – as part of his mission to improve the lives of women and girls in the most hard to reach places of rural Nigeria. Together with his organization, the Global Dental Health Care Foundation, Daniel’s work extends far beyond the provision of dental health services. He actively promotes handwashing in schools, provides antenatal care for women, de-worming treatment for children under 5, and conducts menstrual hygiene management training.

Daniel says that his passion grew after witnessing first-hand the vulnerability of women and children due to poor sanitation, inadequate access to water and health facilities, and open defecation while visiting a rural community as a child.

He has since worked tirelessly with schools, government, civil society, the private sector and local community leaders including religious authorities to provide much-needed menstrual hygiene management (MHM) education. By bringing together the right people, facilitating open discussions and   increasing understanding of MHM among women and men of all age groups, Daniel is shattering taboos about menstruation and breaking the silence.

“It’s not just about providing sanitary napkins,” Daniel says in discussing the lack of menstrual hygiene knowledge, “it’s also about the perceptions and attitudes from the kids in class and the men in the village that affects [girls’] behaviour and even interferes with their learning.”

“For example,” he continues, “I spoke to a girl who cried because she had gotten up to answer a question in class and when she stood up, everyone had laughed at her and ridiculed her because she was menstruating.” He contrasts this example to that of another schoolgirl whose mother had explained the changes that would occur in her body and was much better equipped to manage menstruation as a result, without confusion or shame.

Armed with knowledge gained from his own academic research and WSSCC’s reports and studies on the consequences of inadequate sanitation and hygiene, Daniel is spreading awareness about WASH using statistics and a solid evidence-base which has helped him to get buy-in from the Ministry of Education, local government and influential community leaders who he is calling upon to play a more active role.

He explains that once presented with the facts, community leaders often acknowledge their limitations and recognize that they cannot single-handedly tackle the sanitation and hygiene issues within their communities. “So when they see someone who is willing and ready to take on these challenging issues, they have no other option but to embrace it. They often go a long way to seek my help," he says.

Daniel acts as a WASH advocate, meeting with the Universal Basic Education Commission, the Commissioner for Health and the Post Primary Education Board as well as convening principles and headmasters of primary schools. First, he  sensitizes them to the issue, then works with them to establish a work schedule.  He also monitors this work, conducting pilot studies and research including an evaluation after training sessions to assess the degree of learning amongst participants.

Daniel stresses the importance of working across sectors. "It’s not about one specific sector – religious, education, health sectors, and media are all involved because once we educate them about the problems, they will be able to carry this message forward.” Joining forces with a group of women journalists, he has been able to reach many more people than would have been possible on his own. The journalists are channeling his message and advocating for improved sanitation and hygiene knowledge and facilities,  both through radio and television programmes. “In this part of the world, radio matters because it is the primary means of reaching the rural population," he adds. 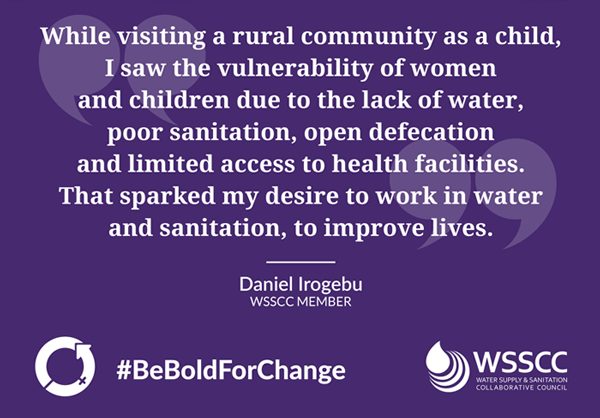 Despite his determination and the collaborative approach, Daniel faces a significant challenge. While a few individuals have supported his work by providing supplies, the future is uncertain. With government efforts focused in major cities rather than rural communities, Daniel is fighting to continue his work without adequate resources. “It is hard to reach these people,” he says, “we struggle in rural areas because we need various items to carry out the training including a utility vehicle, projectors and even generators because there is no electricity.” Daniel’s ability to expand his work to other communities depends on whether or not he can secure the additional funding that he hopes will come soon.

Join us in celebrating Women’s Week by downloading and sharing ou Social Media pack in English and French.