In April, the global Menstrual Health and Hygiene (MHH) arena lost a champion. Along with Hyasintha and Wilhelmina, WSSCC celebrates the life of Rehema Darueshi.

In 2013, Rehema Darueshi began teaching visually impaired students at Toa Ngoma primary school in Tanzania’s community of Kigamboni. Upon her arrival, she learned there was not a single visually impaired student enrolled, though she knew there would be many in the community. Searching from household to household, she found them. Visually impaired herself, it was a matter of personal conviction not to allow disability to stand in the way of education. She encouraged parents to allow their children to enroll in her school, and even offered students accommodation in her home so they would not have too far to walk. Within three years, 35 visually impaired students were studying at the Toa Ngoma school, but this was only the beginning of the difference Rehema would make as a champion and leader in building capacity for people with disabilities. 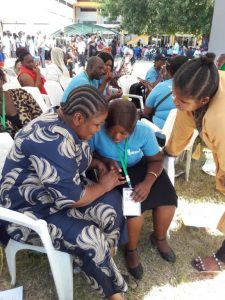 As enrollment of visually impaired students increased, so did the need for teachers who could teach them. Rehema convinced the Ministry of Health to provide three, which was the beginning of the school’s department of special education, under Rehema’s direction. With more students than she could host in her small house, Rehema again mobilized Ministry resources, this time for the construction of a student dormitory, dining hall, kitchen and three additional classrooms.

Rehema was also well aware of the particular challenge that managing menstruation presents to female students with disabilities. She recruited partners, with the support of Hyasintha Ntuyeko, the Founder of Kasole Secrets, a private sector social enterprise, who supported the training of a team of eight teachers and five youth which, together with Rehema, volunteered to educate students in menstrual health management (MHM) at several schools. Lacking books in braille on MHM that could be used by her visually impaired students, Rehema produced them with resources secured from her partners, WSSCC, UNICEF, SAWA, Plan International and Grow and Know. 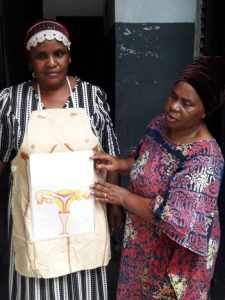 Rehema became active nationally as a WSSCC trainer of MHM in 2017 and was one of the MHM facilitators at a Southern Africa Development Community conference held in Tanzania in December 2019. The opportunity allowed her to share her work with MHM facilitators from other countries, with her presentation on the braille books she produced on Puberty and MHM among the most impressive.

Rehema was a recipient of the I CAN award in 2018, from the Dr. Reginald Mengi Foundation for her volunteer community work for social good. She dreamed of starting a steering committee involving and for MHM for people with different kinds of disabilities as a means of reaching and engaging more people and pushing forward action across Tanzania.

Her life has touched many. She will be especially missed by those who have had the opportunity to work closely with her. Wilhelmina Malima, WSSCC National Coordinator for Tanzania, remembers how Rehema championed health and rights for with disabilities throughout the COVID-19 pandemic:

Perhaps the words most telling of her undying commitment to the well-being of the vulnerable are those of Rehema herself who, just weeks prior to her passing, was producing a second phase of braille fliers to educate her community on how to protect themselves from COVID-19, she was already distributed the first phase.

We should keep insisting that those who are helping us continue to be careful so that they won’t expose or infect us with COVID-19. People with disabilities like myself always need a second hand.

Hyasintha recalled the type of person Rehema was:

It is vivid that this teacher was a living example in our country, her contribution in making sure there is equality in education and a friendly environment and services for students with disabilities was significant, and for sure her legacy will continue to live generation after generation. I will always remember her burning spirit, working hard and constantly adding value to people with disabilities. She never complained, no matter how tough the work turned out to be, but always focused on searching for a solution. She spent massive amounts of her time searching, connecting, engaging and communicating with partners to ensure people with disabilities are not left behind.

Popular Indian actress joined the ranks of Shah Rukh Khan and became the celebrity face for sanitation campaigns in India. As a brand...

WSSCC is excited to announce the launch of a new WASH Case Studies Series which showcases the evolution, activities and impact of...