In Niger,  the lack of access to sanitation and scarcity of adequate information and facilities for Menstrual Hygiene Management (MHM) are considerable challenges for women,  hindering their participation in society, a new study by WSSCC and UN/Women has found.

The findings of the study were presented at a side event on Women’s access to sanitation and hygiene in the informal sector on March 20th, during the 61st Commission on the Status of Women (CSW) in New York.

Co-hosted by the Permanent Missions of Niger and Singapore to the United Nations in New York, the event was chaired by H.E Ambassador Burhan Gafoor, Permanent Representative of Singapore to the UN, Madame Elback Zeinabou Tare Bako, H.E Minister of Women’s Empowerment and Child Protection of Niger and Dr Chris Williams, Executive Director of WSSCC.

In his opening remarks, Ambassador Gafoor said that safe sanitation is a gateway for dignity for gender and equality.

The event was attended by more than 90 people from Cameroon, Guinea, Niger, Nigeria, Kenya, India, the Czech Republic, Singapore and Senegal.

“It’s very important to realize hygiene and sanitation for resident areas in Africa,” said Madame Elback Zeinabou Tare Bako, adding that improvements need to also happen in rural areas, while all inhabitants are educated on these needs.

The study, Menstrual Hygiene Management-The experience of nomadic and sedentary populations in Niger examines and analyzes behaviour and practices for the management of menstrual hygiene and their impact on the livings conditions of sedentary and nomadic women and girls in four regions of Niger.

The report shows that 55% of women in the Tillaberi region missed work as a result of their periods. 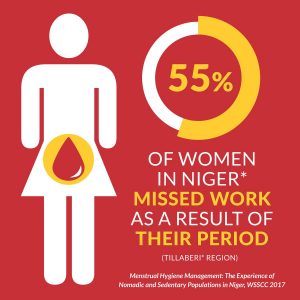 “The theme that came across today is that this can no longer be a side event, this is a fundamental and inacceptable problem. This taboo must be broken, this issue is not simply about gender but it is affecting education, health, water and sanitation, the urban setting and finances,” said Chris Williams.

To move the agenda of women’s access to sanitation and hygiene forward, WSSCC’s Executive Director highlighted five critical actions to be taken: for information to be put before policy makers, to continue to facilitate Inter-ministerial dialogues, to organize policy consultations, to conduct dedicated trainings on MHM and to put monitoring systems in place.

Dr. Blaise Ngendo Yongsi, health geographer and epidemiologist at IFORD-University of Yaoundé II in Cameroon, said that women don’t have access to hygiene and sanitation because there is no clear separation between men and women‘s washrooms, and women don’t feel safe to use them.  He suggested an increase in the number of washrooms in public spaces.

“I think changing the attitude starts with the men,” said Amb. Gafoor, highlighting the need to change attitudes about hygiene during the menstrual cycle and women’s access to sanitation facilities.

Archana Patkar, WSSCC’s programme manager and specialist on MHM, pointed at the hurdles faced by women who travel several hours to reach their vending destination and spend entire days at markets and public spaces without facilities.

“How much worse is it for them if they are having their menstrual cycle or are pregnant?” she asked.

“This issue of menstruation is surrounded by stigma, taboo and shame, it keeps women away from work and girls from schools and most importantly denies dignity to our biological process that perpetuates humanity itself, it is not central to deliberation on gender equality so we want to make a call about it,” she continued.

The Commission on the Status of Women (CSW) is a global intergovernmental body exclusively dedicated to the promotion of gender equality and the empowerment of women. It holds an annual two-week session with representatives of UN Member States, civil society organizations and UN entities at the UN headquarters in New York.

At the event, WSSCC had the opportunity to meet with Abena Ondoa Marie Thérèse Obama, Minister for the Promotion of Women of Cameroon and her delegation at CSW, where the relations between the Council and her government were discussed. The Minister mentioned the relevance of WSSCC/UN Women’s  Joint Programme on Gender, Hygiene and Sanitation in her country and shared the experiences and difficulties encountered by women, especially the poorest, during menstruation.

The Global Sanitation Fund (GSF) in India organized two media workshops in Patna and Ranchi in the States of Bihar and Jharkhand...

Since 2006, the Vietnam Ministry of Health and the Vietnam Women’s Union, with support from the World Bank’s Water and Sanitation...

Dr. Zufan Abera, an advisor to the state minister at the Federal Ministry of Health was among the participants visiting the community...