In March 2017, WSSCC launched its Strategic Plan 2017-2020. The new strategy has guided WSSCC’s work this year as the organization and its members and partners focused on attainment of Target 6.2 within Sustainable Development Goal (SDG) 6 on Water and Sanitation. The strategy has also guided WSSCC’s efforts to demonstrate how SDG 6 helps achieve other vital development and environmental outcomes.

In recent months, WSSCC members and staff experts have expressed their views on the linkages via online platforms. Member Daniel Karanja, Programme Officer of the WSSCC-funded Kenya Sanitation and Hygiene Improvement Programme (KSHIP), participated in a Menstrual Hygiene Management (MHM) training-of-trainers session in Kenya this October. Daniel penned a widely read blog for WSSCC’s website, putting forward the important reminder that boys and men have an equal stake in breaking the silence on menstruation and, ultimately, on the health, well-being and dignity of women and girls.

In recent years, the HuffPost has become one of the world’s most influential online news and opinion websites. WSSCC’s Executive Director Chris Williams wrote a blog to commemorate World Toilet Day in November, in which he described a new ‘sanitation economy’ that promotes human waste as a resource. It is possible, he said, to involve community-based approaches to safely re-use faecal matter, especially for low income urban areas or rural communities. 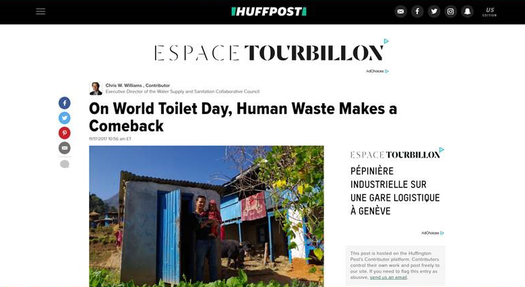 Carolien van der Voorden,  WSSCC's Senior Programme Officer, carried a similar message at the 2017 World Water Week in Stockholm in August. A blog published on wsscc.org  provided observations on the relevance and evolution of sector thinking around the circular sanitation economy, Community-Led Total Sanitation, Equality and Non-Discrimination, and the role of civil society.

The SDG Knowledge Hub, published by the International Institute for Sustainable Development (IISD) provides a knowledge sharing space to advance the achievement of the SDGs. In 2017 WSSCC forged a publishing relationship with IISD that commenced with  thought pieces from two senior experts at WSSCC. In August, Unjela Kaleem, Head of External Affairs, Stakeholder Engagement, Communications and Country Support, drew broad-based linkages between Goal 6 and other SDGs in Sanitation and the SDGs: Starting with the One in Everyone.  In October, in advance of a major climate change gathering in Germany, David Shimkus, Programme Director of WSSCC's Global Sanitation Fund, wrote that Addressing Climate Change Means Addressing the Global Sanitation Crisis.

In addition, the blogs were shared by WSSCC's partner Global Citizen. 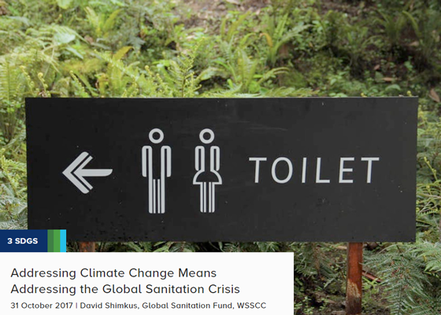 The Government of the Netherlands today announced a renewed investment of $50 million for the Water Supply and Sanitation...