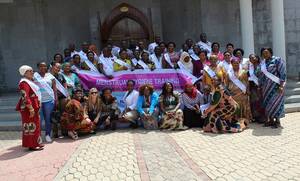 All participants at the end of the training including Members of Parliament crowned as MHM Champions and Facilitator Team. (Photo credit: WSSCC)

WSSCC facilitated a MHM training for Tanzanian Members of Parliament (MPs) from the 10th to 11th of February 2018, in Dodoma Tanzania. This was the first time WSSCC had facilitated a full-fledged MHM training for parliamentarians.The training was a follow-up action proposed at the First National Menstrual Hygiene Management (MHM) Training of Trainers in Tanzania held in Dodoma from 21st to 27th June 2017. The MHM Core Team in Tanzania with the leadership of Ministry of Health and eight Tanzania Women Parliamentary Group (TWPG )members (previously trained by WSSCC) requested WSSCC to train all 393 members of parliament in Tanzania in MHM. The Council committed to honour the request in a phased manner, training a total of 14 male and 29 female MPs from different regions as well as 17 support staff in the first MP training held in February 2018. The training had representation from the Central, Eastern, Lake and Southern Highland zones; with attendance by several key members of the TWPG group as well as other influential individuals such as the deputy speaker of the Tanzanian Parliament.The training aimed at promoting understanding of holistic approach to MHM among the parliamentarians to enable them to advocate for MHM; mainstream MHM in National policies; develop local based solutions; raise the profile of specific sanitation and hygiene needs of women and girls in their respective constituencies and at the parliament meetings; and prioritise MHM in their development initiatives. 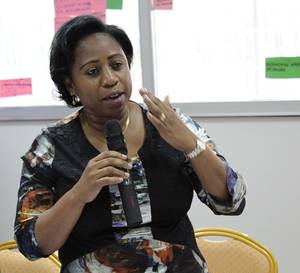 The Tanzanian Minister of Health, Community Development, Gender, Elderly, and Children the Hon. Ummy Mwalimu also attended part of the training. The Minister highlighted the government of Tanzania’s recognition of the importance of MHM for achieving optimal health outcomes. She committed to include a paragraph on MHM in her intervention to the United Nation Commission on the Status of Women in March 2018, which will help to support the integration of the MHM agenda into non-WASH sectors.

In her opening remarks, the deputy speaker of the Tanzania National Assembly Dr. Tulia Ackson applauded WSSCC’S three pronged approach to MHM training which she said is key to addressing dignity and safety. She also commended inclusion of male parliamentarians in the training, highlighting that it was a strategic step to ending male perpetuated stigma and silence around menstruation. 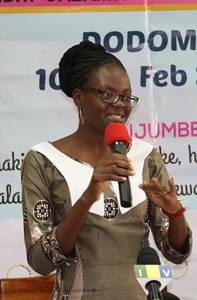 The Deputy Speaker of the Tanzanian Parliament gives a speech in the Opening Ceremony. (Photo credit: WSSCC)

The training placed the spotlight on the role of decision makers in profiling MHM in Tanzania.
Significant achievements of the training included:
1. The commitment from the minister that, “Now we are reviewing our national health policy to include MHM as key for health outcomes.”
2. The pledge by the MPs to legislate on MHM to ensure integration in national and constituency activities and designate clear budget lines in national and council budgets. All the trained members were crowned as champions who developed action plans for various commitments they would implement after the training.
3. Planning for action by groups representing the administrative zones, and assignment of focal points for each zone to assist in the implementation and follow-up process. 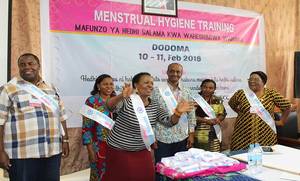 The Chair of the Tanzania Women’s Parliamentary Group is crowned as an MHM Champion. (Photo credit: WSSCC)

During the closing session, Deputy Chairperson for TWPG, Hon. Suzan Lyimo pointed out that the MPs who attended the two days training would “leave the room as change agents on MHM” despite embedded negative myths and taboos associated with menstruation. She also promised that the MPs who attended the training on MHM will join hands to lobby the Government to set aside the budget and put legislation on promoting MHM agenda. She urged all MPs to wear their MHM Champion sashes on the national budget day in parliament to create the needed high-level advocacy in Parliament.