On April 4, 2016, the Water Supply & Sanitation Collaborative Council (WSSCC) was honoured to host a reception at the Intercontinental Hotel to formally welcome the Honourable Minister Amina J Mohammed, Minister of Environment, Nigeria to Geneva as the new Chair of WSSCC. The event was co-hosted by the Permanent Mission of the Federal Republic of Nigeria to the United Nations Office in Geneva, and included almost forty Permanent Representatives and diplomats from United Nations Missions in Geneva. Countries represented included the United Arab Emirates, India, Canada, the United States, Malawi, Pakistan, and many others. 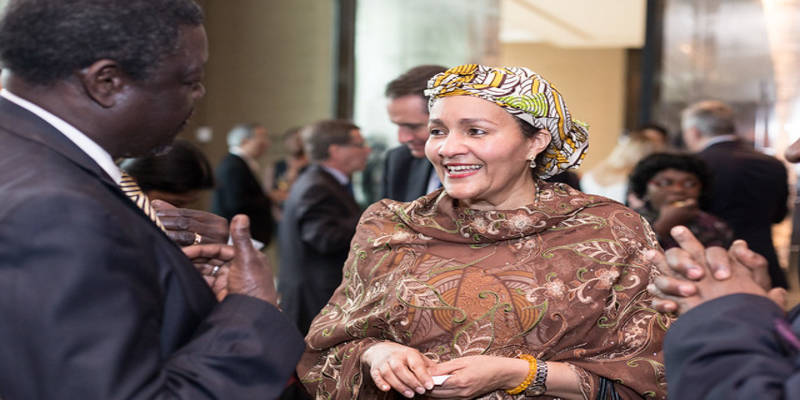 In her remarks, Minister Mohammed said that WSSCC truly embodies the transformative spirit of the SDGs and sustainable development. When highlighting the strengths of WSSCC, Mohammed said that “it’s unique because it brings together people’s voices and the UN with its integrity at country level to do great things that will help inform others in the sector. WSSCC carries the ambition and will make us proud of the things that we need to do, those of us in the development field.”

Welcoming Minister Mohammed to the new role, Chris Williams, Executive Director of WSSCC, said, “She sees the connections. She sees the importance of sanitation and hygiene as an investment for women’s empowerment, for health, for education, for empowerment, for community organizing, for local governments. All of these things come together.”

In her role as Chair of WSSCC, Ms. Mohammed plans to draw on her experience and network of contacts in politics, business, academia and within the UN system, to raise awareness about the need for concerted action. Under her leadership, WSSCC intends to continue its current growth, notably in the Global Sanitation Fund, a programme of WSSCC, which supports sanitation work in many of the world's poorest countries.

In Nigeria, radio dramas are set to bust myths around COVID-19

WSSCC’s 2016 Annual Report is now available and describes in detail the organization’s impact on the health and livelihoods for...

In our last newsletter, we asked you to submit photos that capture your initiatives related to sanitation and hygiene so that we...